THE HORROR OF... SANTA CLAUS! 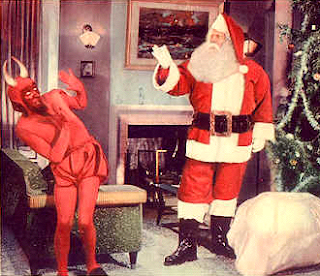 NOTE: This is an encore of a piece originally posted in 2011, with an added thought regarding the song, "Here Comes Santa Claus"

What has to be one of the most surreal and (unintentionally) scariest children’s films ever made is director René Cardona’s 1959 Santa Claus. Enterprising exploitation producer/distributor/showman K. Gordon Murray snapped this one up, dubbed it (poorly) into English and unleashed it upon an unsuspecting American public year after year after year.

I say “unsuspecting” because no one in America could have suspected the Santa legend was so different in Mexico. Or maybe it was just different for the writers and directors behind this cinematic oddity. I’ve read many articles about the film and I’m still not sure what the answer is. All I can say is that the differences are not subtle.

Some examples: In this version, Santa doesn’t live in the North Pole – he lives in a castle in the clouds! He doesn’t have real reindeer – they are mechanical! He doesn’t come down chimneys – he enters homes with a magic key. All this, plus he fights an emissary of the devil (no, the photo at the top of this post isn't photoshopped)!

It gets weirder… and scarier… from there. Santa watches over (or more accurately, spies) on the children of the world via a telescope whose unnervingly snaking appendage has a blinking eyeball for a lens! Santa’s right-hand man is Merlin (yes, the sorcerer from Camelot legends) and somehow Santa has gotten children from all over the world to perform for him in a lengthy and very politically incorrect sequence where he watches choirs from many lands sing to him. Oh, and speaking of children, Santa doesn’t have elves. He has children make the toys for him! 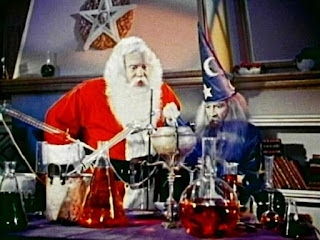 As if Merlin’s involvement wasn’t non sequitur enough, the film also shoehorns a distorted Christian sensibility into its core, as Santa basically works on Jesus’ behalf. Which of course makes Satan mad to no end and inspires the dark one to send his hench-demon Pitch into battle against Santa in both direct and indirect ways (in the form of recruiting bad little kids to bedevil the good ones who have Santa’s favor).

NEW THOUGHT FOR 2019: Could this movie have possibly been inspired by the 1947 song, "Here Comes Santa Claus" by Gene Autry and Oakley Haldeman? I've always felt it had the same bizarre mix of secular and Christian Christmas concepts - "let's give thanks to the Lord above 'cause Santa Claus comes tonight!" I wonder what Esquivel would say about that?...

So it’s not technically a horror film… but it is quite scary. And it’s not a comedy... but it’s so bizarre and absurd that it can’t help but make you laugh in spots (even if that laughter is uneasy at times). For me as a Christian believer, there is an extra layer of weirdness in its cockamamie misrepresentation of the faith that is both scary and funny simultaneously (not funny “ha-ha” but funny as in, “I can’t believe what I’m watching!")...

...but enough of me talking about this film. It really has to be seen to be believed. That plus others have already done in-depth and entertaining examinations of the film which you can read when you click on the links below:

...and best of all, an official blog has been launched containing various articles and reviews of the film – not to mention your chance to vote on such pressing questions as “Which country featured in Santa’s Heavenly Workshop suffered the most ethnic stereotypes?” and “What is the creepiest gadget in Santa’s ‘secret’ lab?” Just click below to visit this new blog appropriately named...

As we wind down the year here’s wishing everyone the safest, happiest and most blessed of holidays.

Now, here’s the trailer for Santa Claus – watch if you dare!