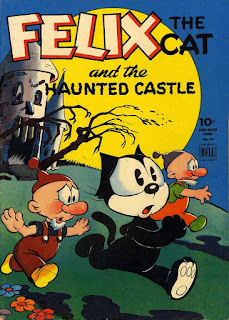 GET SET FOR HOWLS OF FRIGHT & DELIGHT AS YOU CELEBRATE HALLOWEEN WITH THE BOWERY BOYS! 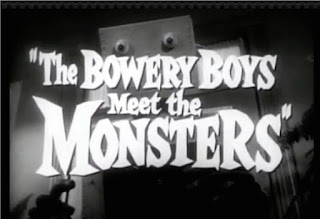 As Scared Silly fans well know, I’m a huge fan of the Bowery Boys (and their other iterations including the East Side Kids). In fact, I’m helping produce a documentary on the comedy troop thanks to Colette Joel, who came up with the idea of celebrating this motley crew of goofballs who began life on-screen as juvenile delinquent toughs (albeit it oft-used as comedy relief) in hard-hitting crime dramas like Dead End, Angels with Dirty Faces, and Mob Town (under monikers including the Dead End Kids and Little Tough Guys).

By the time they became the East Side Kids, more and more of the comedy began seeping into the proceedings, and shortly into their stint as the Bowery Boys, the laughs would ultimately overtake the drama by 100%.

Of course, the Boys are of primary interest here because they dabbled in spooky situations a number of times, as both East Side Kids and Bowery Boys. The night before Halloween, and early Halloween morning, Turner Classic Movies is showing some of the more upfront entries in the Bowery Boys’ horror-comedy canon. The fun starts at 8PM (check your local listings to find TCM’s channel number for your television service, and to confirm start times, which may vary depending upon time zones).

It’s a great line-up showcasing the team at various points in their careers, including a film made after their loquacious leader, Leo Gorcey departed the series (that would be Spook Chasers, with Stanley Clements taking on the role of Huntz Hall’s foil). Several critics have accused the Bowery Boys horror-comedies of having a “sameness” about them, but I beg to differ; most of them have something unique to offer. For example:

- Spook Busters features a wonderful slow-motion fight due to ether, and (together
with the Disney Mickey-Donald-Goofy cartoon, Lonesome Ghosts) was so obviously an inspiration for Ghost Busters.
- Ghost Chasers features an amicable ghost character that befriends Sach
- The Bowery Boys Meet the Monsters was clearly inspired by the Addams Family cartoons which Charles Addams began drawing in the late 1930s. The 1954 film predated the Addams Family TV show by a decade.

My only wish is that they had scheduled Master Minds for an earlier start time. The unique factor in Master Minds is that, for a change in a fright flick (humorous or otherwise), the brain/personality transplant actually happens, and we’re treated to a pair of hilariously entertaining performances as monster man Glenn Strange (the Frankenstein monster in several films including a little number starring Abbott & Costello) impersonates Huntz Hall’s Sach character, and vice versa.

Following are the trailers for each of the films that will be shown, with titles and start times indicated. Can’t think of a better way to bring in Halloween… can you?!


Wednesday, October 31st at 1:30AM -- Master Minds: I couldn’t find an embeddable video of this trailer, but you can watch it at the Turner Classic Movies website by clicking here.

IMPORTANT NOTE: the Bowery Boys horror-comedy films running on Turner Classic Movies are starting EASTERN time. That means if you live in a time zone other than EASTERN time, you will have to check your local listings (for example, the film starting at 8 on the East Coast is actually starting at 5 on the West Coast).