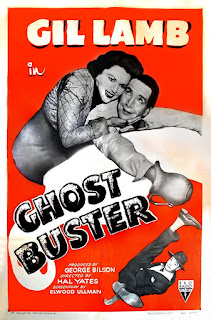 PLOT: Slim (Gil Lamb), an earnest and accident-prone window washer, longs to be a journalist. Fortunately, he just so happens to be assigned to the building that houses the Evening Star newspaper. Catching wind of the mysterious disappearance of a young gadabout set to inherit a fortune the moment his sickly uncle passes away, Slim decides to investigate the case for himself. When the trail leads to what appears to be a very haunted house, Slim starts to wonder if that name will be a byline in the paper, or a marker on a headstone!

REVIEW: This RKO short from 1952 will seem very familiar. First, as a horror-comedy, it plays with all the well-worn set-ups, gags and tropes that fans of horror-comedies are used to. It will also feel familiar to fans of short subjects from Columbia Pictures. Its pace seems a little faster than a typical RKO short, and some of the more frantic, freewheeling moments recall the madcap mayhem typical of a Three Stooges or Schilling & Lane short. Right down to some sound effects that sound like they could have been sampled right from a Columbia short. To top it all off, the lead comic spends most of the short in drag (after all, that’s his way into the house in the first place – masquerading as a nurse when the in-house nurse quits over claims the place is haunted).

To go deeper into the plot would be meaningless as it’s boiler-plate. Namely, things aren’t as they seem, and some nefarious types are going out of their way to purposely scare the wits out of anyone who might interfere with their get-rich-quick scheme. In other words, it’s Scooby Doo meets Knives Out, “and they would have gotten away with it, if not for that meddling, gangly comic in drag!”

This is not to say it’s bad – it moves swiftly and is enjoyable enough in the unfolding, if only average in the grand scheme of things. I’ve given it a slightly above-average grade for its energy and performances, particularly that of Gil Lamb. A lot of your enjoyment will depend upon whether you can appreciate Lamb’s persona, which echoes such other tall, lanky, amiable types as Ben Blue, Joe E. Brown and the aforementioned Gus Schilling of Schilling and Lane.

The haunted house segment of the film is full of tried-and-true “scare” routines to startle our hero and his co-stars. They include:

Playing Vaughn's daughter and Slim's love interest is Carol Hughes. Ghost Buster was one of several shorts where she played Gil Lamb's love interest. Apart from the Gil Lamb shorts, Hughes was mostly a bit player (and often uncredited). Her biggest claim to fame is probably the meaty role of Dale Arden in the serial, Flash Gordon Conquers the Universe. She also appeared in such bona fide classics as Mighty Joe Young and the highly influential noir, D.O.A. She ended up in several comedy features, too with folks like Abbott & Costello, Cary Grant and Red Skelton, and appeared in one of the Blondie series of films, too.
Posted by Paul Castiglia at 12:00 AM