HEY ALL YOU MUGS… DON’T MISS THIS EVENT OF CINEDRAMATIC PROPORTIONS! 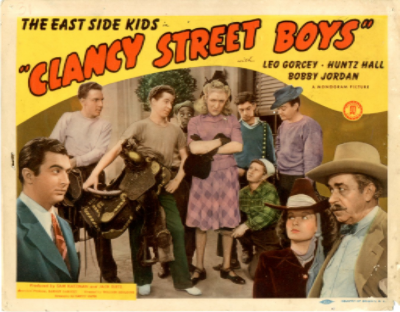 Greetings Scared Silly fans. With my apologies for the break I’ve been taking from the project, there are, as always, several reasons it is on the backburner. One is my continued work on the Bowery Boys documentary, Bowery Rhapsody: the Rise & Redemption of Hollywood’s Original ‘Brat Pack,’ whose creator (and my fellow Executive Producer on the film as well as President/Owner of Handshake Away Productions), Colette Joel graciously brought me on-board. The moving parts needed to create a documentary film are many, and time-consuming. Being deeply involved in the inner workings, however, I can assure everyone that the final result will be more than worth the wait.

As readers of this blog know, I am a major fan of the Bowery Boys movie team as well as their earlier iterations, the Dead End Kids, Little Tough Guys and East Side Kids. Naturally, I am particularly fond of the East Side Kids and Bowery Boys films where the gang got mixed up with (both real and imagined) ghosts, monsters, haunted houses and all manner of macabre mayhem. But of course, with a career (counting all their incarnations) spanning 20 years and nearly 100 films, their horror-comedy output only tells part of the tale,

This year marks what would have been the 100th birthday of Leo Gorcey, one of the two actors (along with Huntz Hall) who are arguably the most well-known (and for a majority of fans, most popular) among the ever-rotating cast of gang members. One of the true joys of working on the documentary project for me has been getting to know the children and grandchildren of the original Dead End Kids. All of them are terrific folks with unique perspectives on their famous forebearers’ legacies, both as performers and patriarchs. 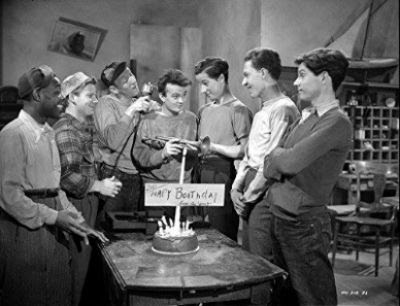 Leo Gorcey’s son, Leo Jr., and his daughter, Brandy are both very active in helping to keep their father’s memory alive. Leo Jr.’s memoir, Me and the Dead End Kid, has been in print for nearly 15 years. Brandy has made some personal appearances bringing special, one-of-a-kind memorabilia relating to her dad and his cohorts to events across the country This Memorial Day weekend, Brandy and Leo’s granddaughter, Madonna will be in attendance at the classic movie showcase and convention, Cinevent in Columbus, Ohio to help celebrate Leo Gorcey Sr.’s birthday.

Brandy and Madonna will display their prized collection of personal photos and memories of Gorcey at their booth. They’ll also offer select merchandise for sale, including Leo Gorcey’s tongue-in-cheek autobiography, An Original Dead End Kid Presents: Dead End Yells, Wedding Bells, Cockle Shells, and Dizzy Spells; Best of all, to commemorate what would be her father’s 100th birthday, Brandy will give a brief introduction to a screening of the East Side Kids classic, Clancy Street Boys. The fun-filled film will be preceded by the first public showing of a teaser trailer for the upcoming documentary on Gorcey and his cinematic cohorts, Bowery Rhapsody: the Rise & Redemption of Hollywood’s Original ‘Brat Pack.’

Joining Brandy and Madonna at their booth will be author Leonard Getz, who wrote a fine book on the team entitled, From Broadway to the Bowery. I originally met Len at a book signing and subsequently during filming of our documentary, of which Len is a part. Click here to read more about Len and his book.

It’s shaping up to be quite the event, and if you’ve never attended Cinevent before, they are offering a ticket give-away for first time attendees. Just click here and here for details.

In the meantime, here are some great East Side Kids and Bowery Boys trailers for films in the horror-comedy genre… ENJOY!