THE LOST SKELETON WILL WALK AMONG US... WITH YOUR HELP!!! 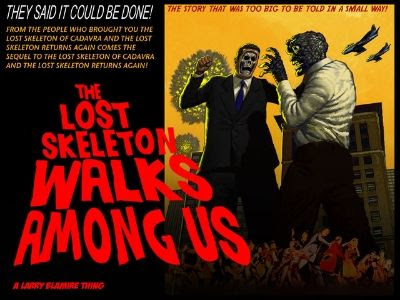 And who is Larry Blamire, a small percentage of you out there may ask?

Why none other than a very good friend of our SCARED SILLY project.

Kidding aside, you may recall this post (if you don't, click "this post" to read it) where I waxed rhapsodic over Larry's film, DARK AND STORMY NIGHT. You see, Larry "gets it." He gets classic horror-comedy. DARK AND STORMY NIGHT hit the Scared Silly target right between the (crossed) eyes with its delightful spoof of "old dark house" movies.

But there was life before DARK for Larry, and it was as if he were being guided like a puppet on a string. Or perhaps a skeleton!

Yes, Larry is also the man who brought us such wacky, satirical offerings as THE LOST SKELETON OF CADAVRA...

...and its sequel THE LOST SKELETON RETURNS AGAIN!

Larry's films are enough to make the writer of the ARCHIE'S WEIRD MYSTERIES comic books (namely me) exclaim, "Hey, why didn't I think of that?!"

Larry is turning to us, the fans to help fund the film. Think of how much fun you'll have watching the finished product!

If that's not enough, Larry's offering a whole smattering of incentives (read: cool swag... and even walk-on bits in the film!) to persuade you to back the latest shenanigans and skullduggery of that lost bag of bones.

You can read all about it on the official Kickstarter page for THE LOST SKELETON WALKS AMONG US (just click on it and see)!

In the meantime, here's Larry's 15-minute plea for help... won't you do what you can to keep the world safe for satire? You've got just 21 days to donate! 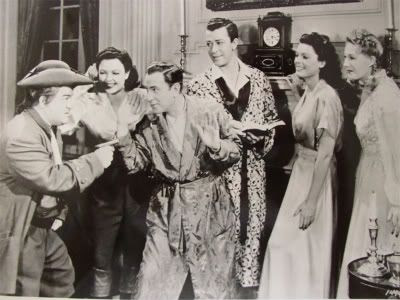 It’s also tied into the American Revolution, hence this post falling on America’s Independence Day. The film’s script is very well written. It tells the tale of Horatio Prim (Costello), a bumbling but masterful New England tinker in 1780 who longs to marry Nora, the housemaid of wealthy estate owner Tom Danbury. To that end, Horatio procures a letter of commendation from General George Washington in hopes of obtaining permission to marry Nora from Tom. Unfortunately, Horatio has a rival for Nora in butler Cuthbert (Abbott), who causes him trouble no end. But the real trouble comes from Danbury himself, who is secretly a traitor out to aid Benedict Arnold. Both Nora and Danbury’s fiancé, Melody (the luminous Marjorie Reynolds) learn of Danbury’s plot. Nora is captured and Danbury confiscates the commendation letter from her (she had been holding it for Horatio) and hides it in the mantelpiece clock, but Melody manages to escape on horseback in an effort to warn George Washington. She soon encounters Horatio, and the two are framed as traitors, executed and dumped into a well.