Speaking of time, I want to take this opportunity to thank you all for making the past few years so much fun for me. Thank you to all those who have tweeted about my blog, chosen to “follow” the blog, have left comments on posts and told others about the project. I am especially grateful to all the blogs and websites who have publicized this wacky endeavor over the years.

Most especially, I want to thank everyone for their patience. As sometimes happens, "real life" truly got in the way of my ability to make headway on the project in 2018. A "perfect storm" of personal and professional challenges, coupled with a quite-unexpected medical development for me, really brought changes to my world... but I know that circumstances will ultimately level out so that I can once again proceed with gusto on Scared Silly.

Special thanks goes to Ken Mandel of the West Orange Classic Film Festival who invited me to be the guest-speaker at a double-feature screening of restored Laurel & Hardy films at their 2018 festival early this year. It's always great to have an opportunity to be a guest-speaker at screenings of classic films, and most especially to engage with enthusiastic audiences with Q&A's. Most gratifying of all is playing a part in introducing legendary movie comedians to young viewers who may never have seen them before. 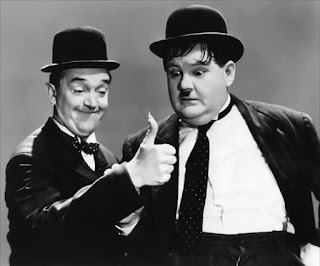 I also had another terrific year working on the Bowery Boys documentary. The film is the brainchild of Executive Producer and owner of Handshake Away Productions, Colette Joel. Her lifelong love of the Dead End Kids, East Side Kids and Bowery Boys is manifesting itself in a wonderful production that I know all fans of classic movies and classic comedy will enjoy. And that includes you, Scared Silly readers! The Bowery Boys' films are among my favorite classic comedies, and they did make several notable horror-comedy films, all of which will be reviewed in the Scared Silly book. 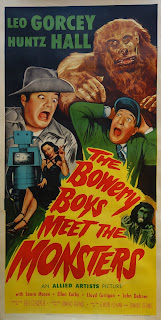 As always, it wouldn't be New Year's Eve here without Vagabond Opera performing “New Year’s Eve in a Haunted House,” composed by avant garde jazz legend Raymond Scott, the man behind many of the melodies heard in Looney Tunes cartoons - enjoy your New Year's Eve!

SOME DAY-AFTER-CHRISTMAS PRESENTS FROM ME TO YOU - 2018 EDITION!

Hope your holidays were grand, friends! Here's a few additional goodies to keep you in the festive spirit!

(NOTE: Many of the feature films, shorts and animated cartoons discussed on this site, being from an earlier time, may contain elements considered insensitive and politically incorrect to us today. Any such controversial themes do not represent the thoughts and opinions of Paul Castiglia and the films discussed and presented here are done so purely for their inherent entertainment and historical value, apart from any such themes).

A HOLIDAY TRADITION: THE CREEPS OF CHRISTMAS - 2018 EDITION!

THIS IS AN "ENCORE" POST - I ORIGINALLY POSTED THIS ENTRY IN 2009 AND THOUGHT I'D RE-POST IT FOR ANYONE WHO MAY HAVE MISSED IT.