WE INTERRUPT OUR REGULARLY SCHEDULED PUBLIC DOMAIN CARTOON TO BRING YOU THIS SPECIAL ENCORE PRESENTATION OF MY VALENTINE'S DAY POST FROM 2010: 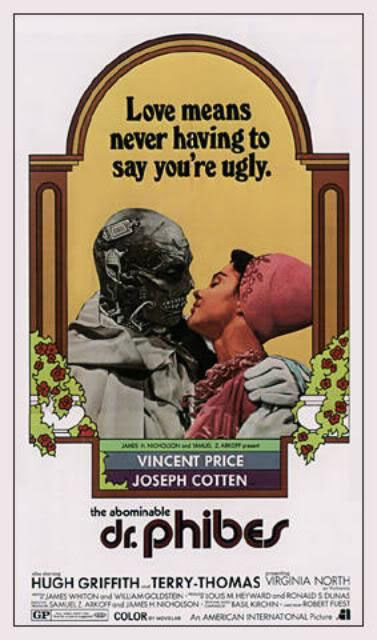 One of my all time favorite films is the Vincent Price classic “The Abominable Dr. Phibes.” I won’t be reviewing it for the “Scared Silly” project because it really isn’t a horror-comedy – it’s more of a horror film with some comedic aspects - dark, black comedy (juxtaposed against some wonderfully colorful art direction). And even if it was a full-fledged horror-comedy it was made in 1971, a full five years after my cut-off date of 1966 (which I’ve designated as the year of the last traditional horror-comedy, Don Knotts’ “The Ghost & Mr. Chicken”). “Phibes” really is a one-of-a-kind not to be missed film, however – check out its trailer:

The reason I’m talking about “Dr. Phibes” on Valentine’s Day is because the “Phibes” movie poster based its wonderful “Love means never having to say you’re ugly” tagline on the tagline of one of the biggest hits of the prior year, “Love Story” starring Ryan O’Neal and Ali McGraw. 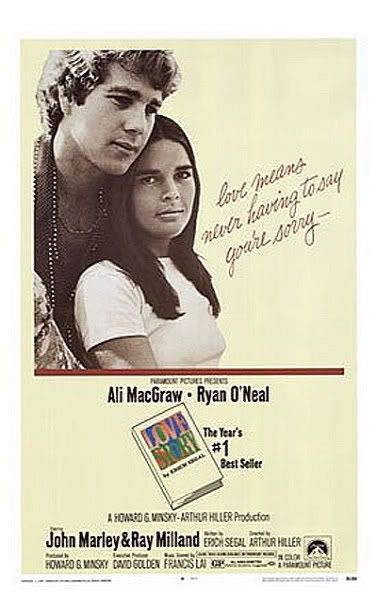 That melodramatic weeper’s tagline “Love means never having to say you’re sorry” became a mantra for many men who were sorry they had to sit through the whole treacly affair, but too afraid to admit as much to their wives and girlfriends! Years later, a shopping mall offered free La-Z Boy recliners to any man who could actually sit through the whole “Love Story” - multiple times in a row - without falling asleep or bailing out completely, as detailed in this news report: 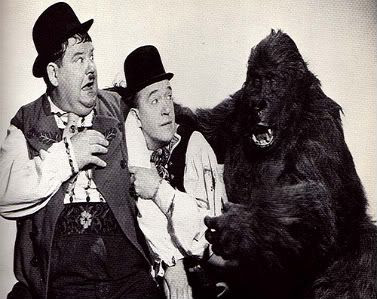 Here’s one of the all-time great examples of unrequited love. It comes from a sublime classic among horror films, “The Bride of Frankenstein.” Again, this isn’t a horror-comedy, but it is a horror film with ample doses of comedy thrown in (along with fantasy, sci-fi, romance, tragedy and all sorts of underlying meanings and themes). And it is required viewing.

There’s an offshoot of the “horror-comedy” film genre that I like to call the “supernatural romantic comedy.” These are films involving one or more partners in a love story who are either ghosts, witches or some sort of supernatural creature. They aren’t always “horror-comedies” because they tend to be on the light breezy side without any of the requisite creepy trappings although sometimes they do have scenes where those supernatural powers are being used to frighten an antagonist deserving of come-uppance. Some examples of films in the “supernatural romantic comedy” genre include “I Married a Witch,” "The Ghost & Mrs. Muir," "Bell, Book & Candle" and the “Topper” movie series.

So to all my “Scared Silly” readers, here’s wishing you a very happy Valentine’s Day. And if you want to watch a good supernatural love story, skip “Ghost” this year and watch Abbott & Costello’s “The Time of Their Lives” instead. Lou Costello actually makes a believable and quite likeable romantic hero, and both he and partner Bud Abbott deliver some top-notch dramatic performances (and of course comedic bits as well). My experience has been that it’s the one Abbott & Costello film that people who don’t usually like Abbott & Costello actually enjoy. So what are you waiting for? Go enjoy it already! 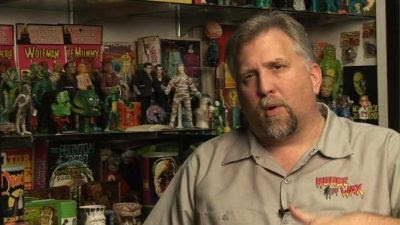 If you're a regular reader of this blog, you know that esteemed character actor Roebuck has graciously agreed to write the foreword for the upcoming book version of Scared Silly.

And now, enjoy this wonderful new short film that showcases Daniel's movie memorabilia, and encourages us all to embrace our inner geeks!