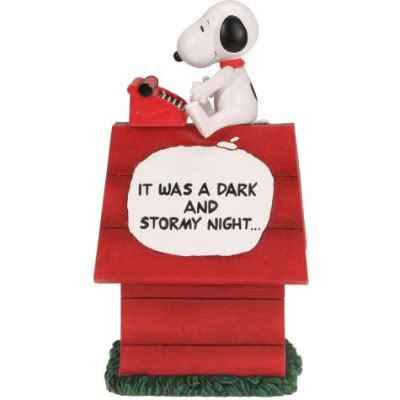 People that know me personally know I'm not a huge fan of "forwarded" emails. I find most of the "forwards" purporting to be factual - whether about some miraculous occurrence or some piece of pending legislation or some obscure historical fact or the like - well, I often find these to be wildly inaccurate - either half-truths at best or just plain old lies. And most are debunked with just a simple search on Snopes.com.

Of course, the other kind of "forwarded" email that is quite prevalent is the "joke." I always open these with trepidation as I'm not generally a fan of coarse humor, either - and many "forwards" slide down such slimy slopes.

The joke I received in an email today, however... well, this is a joke worth sharing. And it is apropos to this very blog, which saves me the trouble of emailing it out to friends as a "forward." Not that I would - I'm not a big fan of "forwards," remember?

Without further ado, here's the joke, titled "It Was a Dark & Stormy Night":

Bob Hill and his new wife Betty are vacationing in Europe - as it happens, near Transylvania. They are driving a rental car along a rather deserted highway. It is late and raining very hard. Bob can barely see the road in front of the car. Suddenly, the car skids out of control! Bob attempts to control the car, but to no avail! The car swerves and smashes into a tree.

Moments later, Bob shakes his head to clear the fog. Dazed, he looks over at the passenger seat and sees his wife unconscious, with her head bleeding! Despite the rain and unfamiliar countryside, Bob knows he has to get her medical assistance.

Bob carefully picks his wife up and begins trudging down the road. After a short while, he sees a light. He heads towards the light, which is coming from a large, old house. He approaches the door and knocks.

A minute passes. A small, hunched man opens the door. Bob immediately blurts, "Hello, my name is Bob Hill, and this is my wife Betty. We've been in a terrible accident, and my wife has been seriously hurt. Can I please use your phone?"

"I'm sorry," replies the hunchback, "but we don't have a phone. My master is a doctor; come in, and I will get him!" Bob brings his wife in.

An older man comes down the stairs. "I'm afraid my assistant may have misled you. I am not a medical doctor; I am a scientist. However, it is many miles to the nearest clinic, and I have had basic medical training. I will see what I can do. Igor, bring them down to the laboratory."

With that, Igor picks up Betty and carries her downstairs, with Bob following closely. Igor places Betty on a table in the lab. Bob collapses from exhaustion and his own injuries, so Igor places Bob on an adjoining table.

After a brief examination, Igor's master looks worried. "Things are serious, Igor. Prepare a transfusion." Igor and his master work feverishly, but to no avail. Bob and Betty Hill are no more.

The Hills' deaths upset Igor's master greatly. Wearily, he climbs the steps to his conservatory, which houses his grand piano - for it is here that he has always found solace. He begins to play, and a stirring, almost haunting melody fills the house.

Meanwhile, Igor is still in the lab tidying up. His eyes catch movement, and he notices the fingers on Betty's hand twitch, keeping time to the haunting piano music. Stunned, he watches as Bob's arm begins to rise, marking the beat! He is further amazed as Betty and Bob both sit up straight!

Unable to contain himself, he dashes up the stairs to the conservatory. He bursts in and shouts to his master...

(you'll have to click on the video of a couple other monsters for the punchline):

CAN YOU DIG IT? 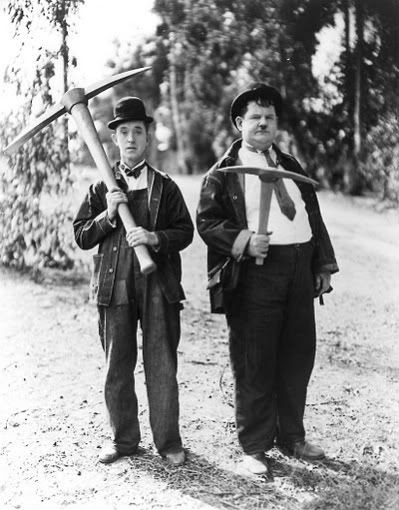 Summer is drawing to a close... time for summer vacations to end and folks like me to shovel out from under the flotsam and jetsam and get back to work! On the docket: another silent Our Gang (Little Rascals) short, more Columbia shorts (including the Stooges of course), the previously promised "Arsenic & Old Lace" and Don Knotts. And maybe, just maybe a whole Christmas week of those smiling pick-axers above, Laurel & Hardy.