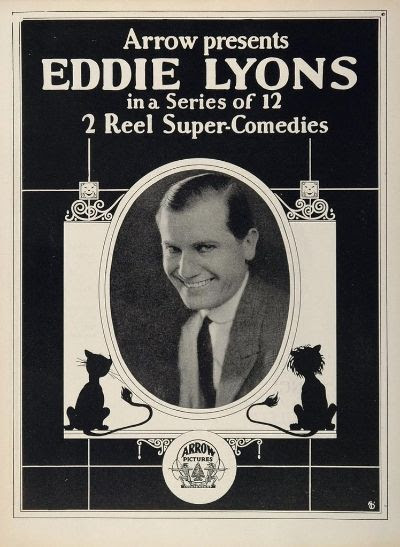 NOTE: This is easily the trickiest review thus far for the Scared Silly project, as this is a silent movie with none of the title cards extant, and further, none of the many newspaper headlines (the short begins at a newspaper publisher’s office) are legible, either, appearing on screen for just brief moments so that the eyes cannot register what’s on them. These facts pretty much wipe out whatever context sets up the film, from just “who is who,” all the way to “how do these folks end up in a haunted house?”

PLOT...?: WWithout any titles, we’re left to wonder why Eddie Lyons and his wife ends up in the haunted house. We only know the couple that seems to own the house consists of a rather shifty husband, and constantly scared, clairvoyant wife. Then again, they may be merely a caretaker and a maid, and not married at all! All we know for sure is there’s someone in a sheet scaring everyone, and a skeleton being operated like a marionette, and lots of things going bump in the night. Can Eddie figure out who is behind it all?

REVIEW: This is going to be one of the shortest reviews in the Scared Silly project as there’s not a whole heck of a lot going on here, subtitles or not. For the most part it’s a farce with people spending more time running around and being scared just for the zeitgeist of it all, although there’s not really actual gags per se…. much like the Jimmie Adams silent horror-comedy, Goofy Ghosts.

Silent film historian Steve Massa was kind enough to set the record straight on Eddie Lyons, for whom readily available information is on the scant and sometimes inaccurate side. From Steve:

“Eddie Lyons hooked up with producer Al Christie at Nestor, where he was part of the ensemble with Victoria Forde, Lee Moran, Stella Adams, Harry Rattenberry, Gus Alexander, Billie Rhodes, etc. Christie teamed him with Lee Moran, and when Al left Nestor in 1916 to set up his own independent company Eddie and Lee went with him but were quickly lured back to Universal with a better deal. The last Lyons & Moran films came out in 1921 (shorts and features) and Peace and Quiet was his first solo comedy. I've found three different reasons given for Lyon's death in 1920s trade magazines - appendicitis, a nervous breakdown, and a brain tumor. Don't know which is true.” 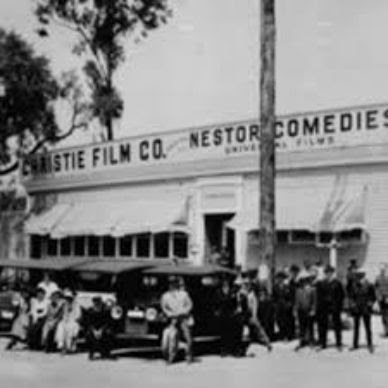 Getting back to the short at hand, the scares are limited to the following:

-A man in a sheet
-A skeleton (literally) in a closet
-A cat... and It’s not even 100% black!
-Lights projecting a garishly smiling face on the wall
-A man covered in soot or flour – but I’ll be darned if I know just how that happened!

Out of the above, the skeleton bit comes off best. Eddie backs up into the closet, right into a skeleton whose right hand is perfectly positioned to land on his shoulder. As he pulls away, the skeleton hand stays attached to his shoulder as he runs through the house, until it finally falls off.

The best that can be said for it is that everyone is very expressive, body and facial language galore, and all move at a fast pace. It should also be noted that not only does Lyons star, but he was in the director’s chair for this short, too.

When all is said and done, if the film is fully restored someday, it can be reassessed and perhaps earn a better rating than the one star I assigned to it. It’s folly to try to give it an accurate rating based on its current condition.

SPOTTED IN THE CAST: Jack Duffy, like Lyons, was a vaudevillian and musical comedy star. His stock-in-trade was making himself up in old age make-up to play grandfatherly roles. It didn’t hurt that he had dentures he could remove! In addition to scores of silent comedy shorts (including Buster Keaton’s Our Hospitality) and some 1930s westerns, some of his other notable appearances include Pop Goes the Easel and Restless Knights alongside the Three Stooges, and The Girl Rush with Vernon Dent.

Dorothea Wolbert’s impressive credits include a plethora of Lonesome Luke shorts starring Harold Lloyd, the feature, Hallelujah, I’m a Bum with Al Jolson and Frank Morgan; the Our Gang/Little Rascals horror-comedy, Shivering Spooks; and a pair of Laurel & Hardy classics: The Battle of the Century and Two Tars. A couple years before her death, she made a notable appearance on the TV show, I Love Lucy playing a character named... Dorothea Wolbert!