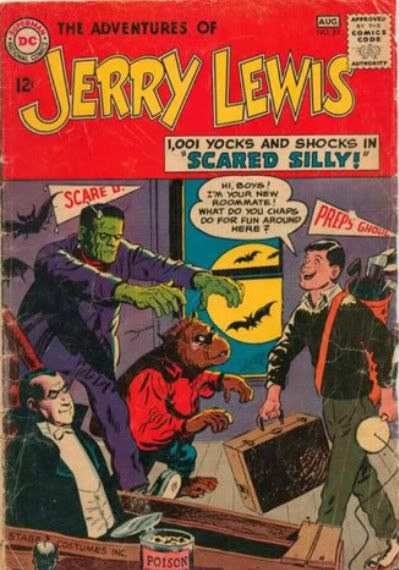 You know what’s an incredible movie? “The Ghost & Mr. Chicken” with Don Knotts. That’s what. It’s so incredible, has so many lovely details and nuances that it’s taking me a year and a day to write a review of it. Of course, the wealth of delights found in that film aren’t the only reasons for the delay.

As I’ve stated previously, “Scared Silly” is still a “hobby” project. I do not have a publisher yet. That means a.) I don’t have a deadline and b.) I’m not getting paid for my work-in-progress. Which means c.) projects that do have deadlines and/or for which I’m getting paid have to take preference. I’m not thrilled that I’ve been too bogged down to get another major review up in a timely fashion, but as always I thank the faithful for your patience.

And… I can’t promise this but maybe, just maybe I can get that “Mr. Chicken” review completed and up by Halloween. If I manage to complete it (key word “if”) it will be my trick-or-treat goodie for you.

In the meantime I thought I’d give you some recommendations for films you can rent (or buy if you choose) and watch this Halloween weekend. Most of these are available at Netflix or Amazon.com. I’ve broken them down into categories:

MYSTERY SERIES ENTRIES: Classic Hollywood excelled at the “movie series” with recurring characters that had one adventure after another in multiple entries – detectives like Sherlock Holmes, heroes like Tarzan, comic figures like Blondie – you get the picture. Three of my favorites make a swell Halloween triple feature. “Nancy Drew & the Hidden Staircase,” the Charlie Chan programmer “Meeting at Midnight” (aka “Black Magic”) and the Sherlock Holmes classic “The Scarlet Claw” present the famous detectives in situations that are quite spooky and atmospheric… and most of all a lot of fun! These are not comedies but they do contain some laughs – the mystery series were known for being deft blends of action, intrigue (of course), adventure and comedy. These three have differing production values as well as acting and script quality (the low budget Chan entry suffering the biggest deficit in these areas) but son-of-a-gun if they don’t all deliver on the entertainment scale – the engaging leads in each see to it that all are compelling and enjoyable entries.

PSYCHOLOGICAL TERROR: A big misconception among many people is that old movies are “unsophisticated.” Balderdash! Films that challenge audiences and make them think have been around since the inception of cinema. In Hollywood’s Golden Age, this meant the occasional “thinking man’s horror film,” exemplified by the handful of films produced by Val Lewton at RKO. Three films in this genre that I really enjoy are Universal’s original “Black Cat” from 1934 with Boris Karloff and Bela Lugosi (not to be confused with the 1941 horror-comedy of the same name with Hugh Herbert and Bela Lugosi that I reviewed here), “The Seventh Victim” from 1943 – one of the Val Lewton produced films I mentioned above, and 1957’s “Night of the Demon,” a British-produced film known in the US as “Curse of the Demon,” directed by Jacques Tourneur. All three tales are haunting and disturbing with images and instances that will stay with you long after the end credits have rolled. Don’t look for comic relief here – these are dark films about dark Satan worshippers… but at least one (“Curse”) has somewhat of a happy ending. I mean, as happy an ending as a dark film about a dark Satanist and the dark demon he conjures can be…

COMEDY SERIES ENTRIES: Remember those mystery series I talked about above? There were some great comedy series, too. I’m not talking about Laurel & Hardy or Abbott & Costello or Bob Hope or any number of famous comedians who made several consecutive films over the years. The comedy series specifically revisited specific fictional characters from film-to-film… and several of them had horror-comedy entries. The series based on the famous Blondie comic strip delivered one of the best of the horror-comedies, “Blondie Has Servant Trouble.” The Francis the Talking Mule series breathed its last with “Francis in the Haunted House.” The Bowery Boys were forever getting mixed up with haunted houses, mad scientists and gorillas – throw a stone and you’ll hit one of their classics. Let’s make it “Spook Busters.”

NEWER FILMS FOR THE WHOLE FAMILY: One of the absolute best family horror-comedies is Sky Soleil’s “How My Dad Killed Dracula” starring Daniel Roebuck. And it’s a short to boot! I cannot recommend it highly enough, especially if you’re looking for something appropriate for the whole family. You can buy a Blu Ray or download the short when you click here. Larry Blamire has also been making spoofs that are throwbacks to the classic horror films of yesteryear. You can’t go wrong with entries like “The Lost Skeleton of Cadavera” and “A Dark & Stormy Night.”

CLASSIC HORROR-COMEDIES OFF THE BEATEN PATH: Abbott & Costlello… Laurel & Hardy… the Three Stooges… the Little Rascals… you know how much I love them all! But I’d love it if you got familiar with some of the talents that are no longer household names… and it just so happens several of their classic horror-comedies are available on DVD. Try Hugh Herbert and Allen Jenkins in “Sh! The Octopus” (a recent addition to the customized Warner Archives line). Or Hugh Herbert and Broderick Crawford in the previously mentioned (1941 comedy) “The Black Cat.” Wally Brown and Alan Carney are on a mission to retrieve some undead talent for their all-singing, all-shambling revue, “Zombies on Broadway.” And what happens when Boris Karloff, Bela Lugosi and Peter Lorre team up to scare the Kay Kaiser band? “You’ll Find Out” when you rent the movie of the same name! Last but not least, that Dracula man meets Jerry Lewis’ biggest nightmare (aka Sammy Petrillo) when “Bela Lugosi Meets a Brooklyn Gorilla!” So what are you waiting for? Stock up on these gems and get those DVD players churning this weekend!