HAVE YOU HEARD ABOUT THE TRICKS & TREATS THIS HALLOWEEN SEASON?! 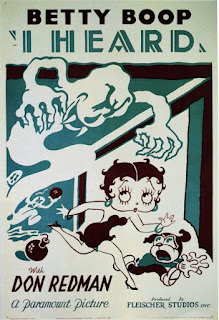 Hello Scared Silly fans. I hope you’re having some frightful fun as the season progresses. I wanted to tip you off to some scrumptious tricks and treats some friends of mine are serving up in the days ahead. Open up your goodie bags… here we go!

My friend Tommy Stathes is an animation historian, an educator, a film restorer, and champion of classic films (animated and otherwise) and their history. Tommy does such vital work and for anyone interested in these classics, I encourage you to support Tommy's endeavors in any way you can.

To that end, Tommy has announced several upcoming events revolving around screenings of animated horror-comedy shorts. These include:

1. 16mm Cartoon Carnival #98: Scary Town The Cartoon Carnival series returns with *two* unique, back-to-back programs! Happening at Rubulad in Bushwick, on Sunday 10/24/21 at 3m & 6pm. Space is limited, and all of Tommy’s 2021 events have sold out before showtime. Grab advance tickets *now* if you want to be there! Click here for more details and tickets.

2. Animation Block Party Halloween Haunts: Tommy will be taking part in the annual Animation Block Party festival once again on Saturday, 10/30/21 at 8:30pm for a special evening of spooky 1920s-1930s cartoons. These will be brand new restorations of the films, shown at the esteemed BAMcinematek in Brooklyn. Click here for more details and tickets.

I’ve written about my friends Ben Model and Steve Massa before. They are the co-hosts of the SILENT COMEDY WATCH PARTY, a brilliant hour and a half streaming show of silent comedy films accompanied live on the piano by Ben, with historical background from Steve. Just as they did last year, once again they’re clearing the cobwebs to bring us some silent screams, although in this case, it’s screams of laughter! Per Steve Massa:

“This week's SILENT COMEDY WATCH PARTY is an "All New" Halloween episode. Our headliner is Stan Laurel who spoofs the Jekyll and Hyde story in DR. PYCKLE AND MR. PRYDE (1925). Koko the Clown has some scary encounters in KOKO SEES SPOOKS (1925), and poor Musty Suffer has identity and disfigurement issues in MUSTY'S VACATION (1917). The fun begins Sunday at 3 pm (ET).” More details when you click on this link.

Well, Boris Karloff is certainly popular among Scared Silly fans, having appeared in a whole slew of horror-comedy films I’ve written about here for my blog and my book. Clicking here will bring you to all my Boris reviews on this blog.

My friend Ron MacCloskey has written and produced a fantastic new documentary called BORIS KARLOFF: THE MAN BEHIND THE MONSTER and next week you’ll have the opportunity to see two screenings of it in New Jersey, including Q&A with Ron and Boris’ daughter, Sara. Events are Tuesday, October 26th at 6PM in Montclair, NJ; and Thursday, October 28th at 7PM in Cranford, NJ.

Click here for details and tickets for the Cranford screening.

My friend Denny Daniel’s Museum of Interesting Things is an educational endeavor that also entertains. It is a traveling museum that goes to schools, events, conventions, other museum and gallery spaces, private parties, camps and more, and also has a virtual component. Denny's goal is to present to the public of all ages things (especially inventions) both common AND rare, while explaining the evolution of where it all came from. As he likes to say, “to show you your iPhones didn’t pop out of thin air.” Best of all, whenever Denny does an exhibition, you can actually touch the objects he's presenting, and operate them, too!

On Friday, October 29th Denny will hosting his “Groovy Ghoulies” Halloween Secret Speakeasy, which will include 16mm film screenings of abbreviated versions of horror and horror-comedy films, along with festive shorts, spooky cartoons, and perhaps a singalong or two “in the spirit” of Halloween! Click here for more information.