SOME SILENT SCREAMS FOR YOU TO STREAM! 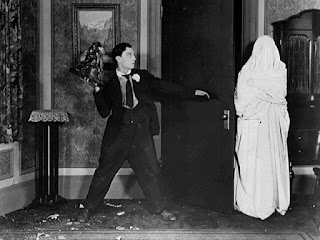 This Halloween season, you'll have two great chances to enjoy several fantastic horror-comedy shorts from the silent era... and in both cases, they'll feature live accompaniment on the piano by composer and film historian, Ben Model!

First up is this year's fifth annual "Knoxferatu" presentation. Film historian Kelly Robinson is behind this Knoxville, Tennessee event focusing on silent horror films. Usually an in-person event where patrons can watch the films in theaters while listening to live keyboard accompaniment, the events of 2020 have necessitated a pivot to a virtual screen.

The fun unspools this Tuesday, October 20th at 7:30 Eastern time. Kelly has curated an eclectic mix of spooky laughs ranging from pioneering efforts, to one of the screen's first international superstars, and an earlier effort from half of one of the legendary comedy duos of all-time!

The pioneering films are The Thieving Hand and Dream of a Rarebit Fiend. The former was directed for Vitagraph by J. Stuart Blackton, a pioneer in the field of animation. The latter was directed for Edison by Edwin S. Porter - the pioneering filmmaker behind The Great Train Robbery - and based on comic strips conceived by pioneering comic artist and animator, Winsor McKay. Have I mentioned the word "pioneer?" Those two films alone offer a great history lesson in some of the leading lights and studios of filmmaking's formative years. They also happen to be surrealist masterworks loaded with imaginative effects that still have impact, and tons of humor, too!

Max Linder was a French film clown and filmmaker who is considered one of, if not the very first, International film stars (a title he ultimately shared with American funnyman John Bunny). Au Secours!, also known as Help! and The Haunted House is an early example of the "old dark house" horror-comedy template, inspired by books like Earl Derr Biggers' Seven Keys to Baldpate and Mary Rhinehart Roberts' play, The Bat. You know, that business about surviving the night in a "haunted" (or is it?) house and collecting an inheritance as a reward.

Stan Laurel needs no introduction to readers here. Of course he ended up in arguably the most beloved comedy duo to ever grace the silver screen, Laurel & Hardy. He found his true voice, and joy there. But on his way to comedy nirvana, he wore several other hats including supporting player, behind-the-scenes director and gag man, and attempts at solo stardom that ranged from everyman Charley Chase-style efforts to a series of film parodies. Those parodies resulted in some corkers like Mud & Sand wherein Laurel portrayed, "Rudolph Vaselino;" and the epic that Knoxferatu brings us, Dr. Pyckle and Mr. Pryde. And epic it is - man is it a well-mounted film loaded with extras and production values. And Stan in there pitching, bending Barrymore's profile toward his own madcap machinations!

Knoxferatu is being offered this year as a "donate what you can event." Just click here to reserve your ticket.

On Sunday, October 25th, Ben Model returns to the piano to regale everyone with more soundtracks created on the spot (yes, he composes as he goes along and his scores always perfectly match the action)! Ben Model and his colleague, film historian and author Steve Massa have been entertaining and edifying audiences just about every Sunday since the lockdown began with their Silent Comedy Watch Party. As you would expect, it's a funhouse full of silent comedy goodness, featuring not just some of the most beloved, well-known film clowns of all but also showcasing some lesser-known folks whose talents rival the superstars.

Each episode of The Silent Comedy Watch Party streams "live" on its premiere Sunday at 12 Noon Eastern time, and shortly thereafter is archived on YouTube for later viewing, so you can watch whenever you'd like.

Ben and Steve's offerings for October 25th include an entry from the recently rediscovered "Musty Suffer" series starring Harry Watson, Jr. as Musty; a short from one of the earliest (pre-dating Laurel & Hardy) comedy duos, "Pokes & Jabs" (aka Bobby Burns & Walter Stull), and some guy named Buster Keaton.

Musty Suffer, like the work of Charley Bowers, was heavily influenced by the "trick films" of artists like movie effects pioneer and stage magician, George Melies; and the aforementioned Blackton. And from what I've seen of Pokes & Jabs, the fast-paced slapstick hijinks of another early duo, Ham & Bud, as well as the rotund trio, the Ton of Fun, comes to mind. Though I've yet to see the Musty and Pokes & Jabs shorts Ben and Steve are showing, I'm certain they will be fun-filled efforts.

As for Buster Keaton, his astoundingly imaginative The Haunted House is the featured headliner. You can read my review of this classic short by clicking here. Just note one thing: I'm much more enamored of Keaton now than I was when I first wrote that review, so a tweak of what I wrote originally may be order.

Click here to learn more about the Silent Comedy Watch Party, access links to past episodes, and get the link for the October 25th episode when it becomes available. And speaking of the Silent Comedy Watch Party... for all the East Side Kids fans reading this, Ernie "Sunshine Sammy" Morrison is actually being featured in this weekend's Silent Comedy Watch Party, in some early Our Gang silent shorts. Morrison played "Scruno" in all three of the East Side Kids' horror-comedy efforts, Boys of the City, Spooks Run Wild, and Ghosts on the Loose. When the team morphed into the Bowery Boys and continued mining laughs from the horror-comedy sub-genre, Morrison didn't transfer over, but he certainly is one of the most-loved of all the Our Gang and East Side Kids casts!

Be sure to mark your calendar so you can enjoy these spooky, kooky pre-Halloween treats!