THIS HALLOWEEN, CELEBRATE THE SCREAMSON WITH SOME SPOOKY, KOOKY CARTOONS! 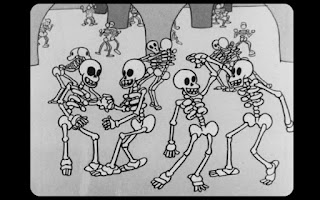 Greetings, Scared Silly fans! Hope you’re gearing up for Halloween. As I’ve been mentioning in previous posts about virtual screenings (like this one and this one), the events of this unprecedented year have led to many cancelations of live events. Thankfully, there are virtual options for horror-comedy fans to enjoy ghouls and fools.

This Halloween weekend, you’ll have two such opportunities. Both involve animation, including one with which I’m directly involved.

The fun kicks off this Saturday, Halloween day 2020 at 2:30 PST/5:40 EST. Thanks to my friends at the Old Town Music Hall in El Segundo, CA there will be a short little presentation to get you in the mood for boos. Before I get to the details, I’d like to fill you in on what we originally had planned. It was actually supposed to be a much bigger event. Though I’ve spoken at various classic film screenings through the years, the first weekend of October was going to be a dream come true: I was actually going to speak at four different screenings of horror-comedy shorts and trailers spanning the entire weekend! The event, curated by me would have included appearances by Buster Keaton, Laurel & Hardy, Abbott & Costello, The Little Rascals, The Bowery Boys, Bob Hope, and The Three Stooges. It really would have been something, but alas, it just wasn’t meant to be….

…However, the alternative will be fun, too. As the Old Town Music Hall has been doing since the pandemic started, they will once again offer a brief, 20-ish minute presentation of the theater/concert venue and the fun, entertainment and culture it brings. The Old Town Music Hall is an historical institution, starting life as an original silent movie theater. A 5013C charity, they depend upon the support of gracious donors. If you believe in their mission of preserving the artforms of movies and music, I hope you will consider donating to them by clicking here.

At the centerpiece is the theater’s crown jewel, the Mighty Wurlitzer organ. The amazing Edward Torres, the theater’s resident organist will regale everyone with a medley of frightfully delightful festive tunes for the season. The medley will be followed by a classic silent horror-comedy animated cartoon short, Koko Sees Spooks with Edward accompanying on the organ… and a short introduction from me.

Disclaimer time: I haven’t seen/heard the playback yet, but I feel it’s possible this isn’t the best introduction I’ve done. I’m a bit out of practice – the last time I spoke at a screening was 2017 so I’m a bit rusty. This was filmed in one take. I know I forgot to say some things I wanted to say, I know I missed my mark on the stage during filming, I was speaking to an empty theater, and I know I rushed through some of it. My hope is that the final result is better than I recall it being as it was happening, but if not, I hope you enjoy it just the same.

Now, down to some important thank yous: The restored version of Koko Sees Spooks, the Max and Dave Fleischer frolic has been graciously provided by animation historian and archivist, Tommy Jose’ Stathes. It’s available on his essential DVD/Blu-ray combo, Cartoon Roots: Halloween Haunts that you can order from Amazon by clicking here. It’s highly recommended by me, and your purchase goes to support the vital work Tommy is doing. Special thanks also goes to James Moll from the Old Town Music Hall for facilitating and filming the event, and of course to Edward Torres just for being such the amazing good will ambassador he is, in addition to his keyboard virtuosity. 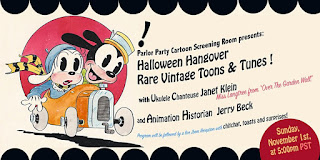 Thanks to the duo I’ve dubbed, “J&J” – chanteuse Janet Klein and animation historian Jerry Beck, the Koko cartoon on Halloween is merely an appetizer. That’s because the day after Halloween Janet and Jerry are presenting what they’re calling, “The Halloween Hangover.” Janet and Jerry have been doing a number of virtual streams during this pandemic time. They feature the musical stylings of Janet Klein on ukulele and vocals, often adopting her best, coquettish Betty Boop voice; and of course, the vast, endless animation history knowledge stored in the mind of Jerry Beck. Half of the fun is reveling in how much their contrasting styles complement each other; they are clearly united in their love of classic animation and vintage music. In fact, think of Janet & Jerry as sort of a Sonny & Cher of the classic animation/vintage music scene… they definitely send off fun-filled vibes!

The cartoons Jerry & Janet have on tap are some real corkers. Featured will be:

The Halloween Hangover happens on Sunday, November 1st at 5PM PST/8PM EST. Tickets are available from EventBrite when you click here.

Don’t miss out on all the hair-raising hijinks this weekend! Avail yourself of these classic horror-comedy cartoon streams!

And if you like what you see this weekend, consider getting yourself a copy of that Cartoon Roots: Halloween Haunts collection… you can watch a trailer for it below. HAPPY HALLOWEEN!!!