YOU'LL POP YOUR EYES OUT, KID! 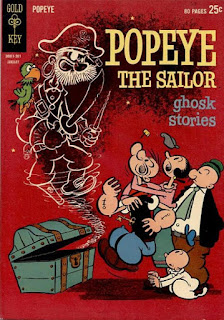 I have a cherished friend from my college days named Brendan and we still communicate to this day. Which is easy as pie given our overlapping interests in vintage comedy films, comic strips and comic books, and classic animated cartoons.

One of the milestone characters we share an affinity for is Popeye, who began life as a bit player in E.C. Segar’s celebrated newspaper comic strip, Thimble Theater. As you can probably guess, the initially rather gruff sailor ultimately took over the whole thing and became the sun around which every other character in the strip revolved.

So, what’s prompted me to discuss Popeye here on this blog dedicated to live action funny folks getting mixed up in spooky shenanigans??

As is wont to happen, an interaction between Brendan and I over how many Three Stooges shorts utilize stock footage, how many are remakes of earlier shorts, and how many are remakes that simultaneously contain re-used footage, led to a similar discussion about cartoons that did the same thing. In particular, Popeye.

This particular 1954 Famous Studios color Popeye short, to the best of my knowledge doesn’t re-use any scenes from an earlier cartoon; however, it is at least a partial remake of one of the classic Fleischer Studios black and white Popeyes, Ghosks is the Bunk.

The major difference I’m most concerned with is that Fright to the Finish is in the public domain, while Ghosks is the Bunk isn’t, hence my running it here now worry-free, to provide a few laughs until the next classic live-action horror-comedy I review. ENJOY!