JUST BE-CLAWS IT CRACKS ME UP! 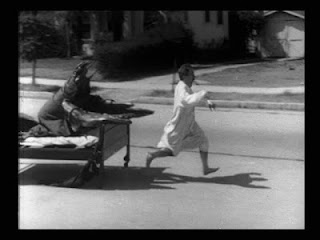 Here's a real oddity that's both jaw-dropping and hilarious. I'm sharing it because I think it would be of great interest to Scared Silly fans, even though I haven't quite decided yet if I'll actually be including a review of it in my book.

This is a silent film from 1928 called The Fresh Lobster, starring Billy Bletcher, who would go on to great heights in the talkie era as he was an amazing cartoon voice artist for Disney, Warner Brothers and others; and also appeared in many live-action comedies hob-nobbing with Our Gang, Laurel & Hardy, Wheeler & Woolsey, Olsen & Johnson, Jack Benny, Red Skelton, W.C. Fields, the Three Stooges and so many more.

Sprinkled among the many animated shorts, and live-action shorts and features Bletcher did were several efforts on the horror-comedy side, including one I've reviewed here, the last Hal Roach produced Our Gang short, Hide and Shriek.

The Fresh Lobster comes from a tradition of silent films often referred to as "trick films." These films (primarily shorts) concentrated on pulling off amazing visual illusions, filled with special effects. Sometimes short on story - utilizing scenarios that seem in place only so that the filmmakers could show off new effects they dreamed up - the films were documents of pioneers at work, pushing past the edges to see just how limitless film could be. Three of the most renown practitioners of the sub-genre were:

* George Melies, French stage magician-turned-filmmaker whose films such as A Trip to the Moon and The Kingdom of the Fairies influenced countless science fiction, horror and fantasy films to follow.

* J. Stuart Blackton, British-American producer-director considered one of the founding fathers of American animation. He also pioneered stop-motion effects in live-action/animated hybrid films like the horror comedy, The Haunted Hotel.

* Charley Bowers, American cartoonist and comedian whose work has only recently been rediscovered in the last couple of decades. Utilizing what he called the "Bowers Process," his mixes of live action and animation were even more wild, and quite a bit more surreal, than Blackton's.

The question I have is this: are "trick films" something I should consider covering in great detail in my book, or should I only limit my coverage to those films which are obviously right in the sweet spot of being spooky comedies, like The Haunted Hotel? 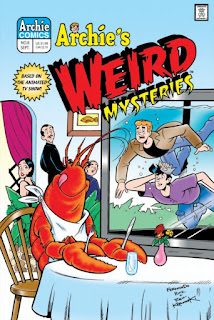 Which brings me back The Fresh Lobster. Where do I draw the line on this one? Do I include it simply because it's an early example of the "gigantisized animal who would otherwise be harmless" monster movie sub-genre that proliferated the 1950s, with atom bomb irradiated ants, spiders, lizards and the likes terrorizing small towns and big cities alike? Or do I consider it merely a hilarious, inventive and quite whimsical little trifle that has barely anything to do with scare comedies? I'm interested to hear what you think.

As for the genesis of this film, it seems to be a riddle, wrapped in a mystery, inside an enigma. No less an authority than Steve Stanchfield - animator and film historian who runs Thunderbean Animation, one of the foremost outfits curating animated treasures on DVD and Bluray for our personal enjoyment and edification, seems to know its origins. He wrote about it on the Cartoon Research website - and when not a single one of the esteemed members of the Cartoon Research team can easily pinpoint the background behind something, you know it's a real... and reel conundrum.

Speaking of foremost animation historians, Scared Silly friend Tommy Jose' Stathes of Cartoons On Film/Cartoon Carnival included The Fresh Lobster on his Bluray release Cartoon Roots: Halloween Haunts. This essential collection also includes the aforementioned Haunted Hotel from Blackton, and is loaded with animated gems in the horror-comedy tradition featuring such cartoon stars as Felix the Cat, Koko the Clown, and the original, humanoid versions of Tom & Jerry. It is required viewing for all Scared Silly connoisseurs! If you'd like a copy, just click here to order through Amazon (proceeds go to Tommy). I fully support Tommy's efforts to make animation history available to the public, and I encourage you to do so, too.

Oh, one last thing: that comic book cover above. That's Archie's Weird Mysteries issue #8, from September of 2000, written by yours truly. To this day, amazing artist Fernando Ruiz, who drew the stories I wrote for that series ribs me about making him draw a giant lobster running amok. When I set out to write this post, it was my intention to tell him it was just a coincidence that my story mirrors this old comedy short. But then I read the comments section in the Cartoon Research link above, where someone stated seeing the film on PBS's Matinee at the Bijou program. I watched that show religiously as a kid, so while I swore to myself I never saw the short before writing that comic book story in 2000; well, now I'm not so sure. You'd think I'd have a vivid memory of such an extraordinary film, but perhaps it was just embedded in my subconscious in the years between.

Now without further ado, here is Billy Bletcher in The Fresh Lobster. Note that this is a 1948 re-issue to which music was added. And remember to put your bib on before watching!