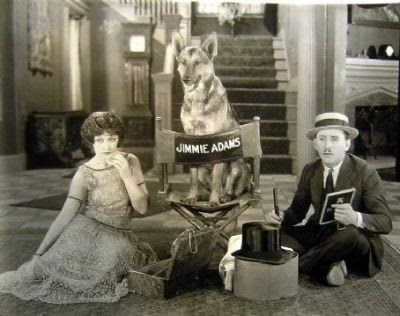 PLOT: On a dark, stormy night, Jimmie Adams, his wife, Mary and the family dog, Buddy head to Jimmie’s uncle’s house for a relaxing vacation. It turns out to be anything but relaxing as they arrive right in the middle of a skull-masked thief’s plot to pilfer uncle’s riches! Worse, the thief is pulling out all the stops to scare everyone out of their wits in the process. Can Jimmie and his family help his uncle and the servants foil the masked fiend’s machinations before fear drives them from the premises?

REVIEW: Jimmie Adams was a silent film comedian who began his career in films in 1917 for Fox Sunshine Comedies, and soon added to his resume Universal's Century Comedies and Jack White's Mermaid and Cameo Comedies for Educational, plus a very brief stint in the Hall Room Boys comedies from FBO/Columbia. Ultimately, the bulk of his work was primarily done for producer Al Christie. Christie’s comedy shorts were distributed by both Educational Pictures and Paramount. Ill health in 1928 led to a hiatus for Adams, but he returned in the early 1930s as part of the singing group The Ranch Boys in a number of Charley Chase shorts.

Goofy Ghosts fell right in line with the typical one and two-reel silent horror-comedy shorts of the day. There was barely an idea provided as a reason for the main comic and cast to end up in a haunted (usually allegedly-but-not-really) haunted house – it was just, “get them into the haunted house as soon as possible and let the gags fly.”

Only thing is, there weren’t always gags. When there were – as in pretty much all the Laurel & Hardy and Our Gang (aka Little Rascals) silent horror-comedies – they were simultaneously explosively funny and wildly inventive. But when there weren’t, you got entries like Snub Pollard’s Grab the Ghost.

Goofy Ghosts, alas doesn’t have many gags, and not much invention, but it does have game performers, and here that makes all the difference.

The set-up is simple: Jimmie and family are temporarily stranded on a flooded road during a storm while headed to Jimmie’s uncle’s house. Meanwhile, at Jimmie’s uncle’s place, a spooky drama unfolds when the uncle hears odd noises in the house.

Uncle and his servants fear there may be intruders in the house, a fear that is accelerated when they realize the telephone line has been severed. The fear is then confirmed when a handwritten note is slid through the mail slot that reads, “Give me ten thousand dollars or you’ll look like me. The Skull” (including an illustration of a skull next to the signature, naturally).

The exaggerated, broad acting by this trio in reaction to this note is comical indeed, and sets the tone for the rest of the short.

When Jimmie arrives at the front door, he slips on the welcome mat and his thud sends Uncle and company scampering. Then when he enters the house, he’s greeted by buckshot in the behind, a broom to the face and a pop with a baseball bat. Meanwhile, Mary sees a skull-faced figure in the bushes outside.

Before too long, the house residents realize it’s just Jimmy and his wife and everyone teams up to face the common threat... but not before a false scare is provided by Buddy the dog ringing the doorbell. 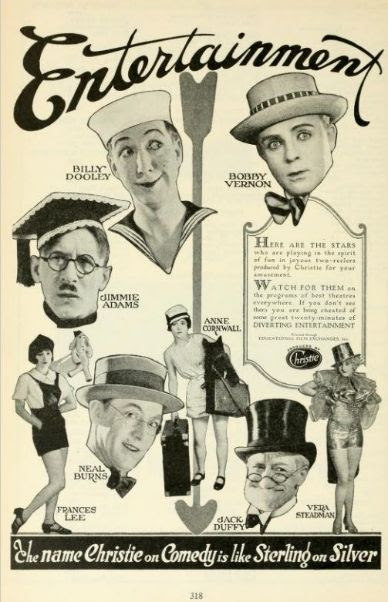 As the heroes peer in the yard to look or the skeleton, the figure sneaks into the house behind them.

They try to keep their heads and remind themselves it’s likely bandits just after the money, but the skull-adorned crook capitalizes on their fear, constantly turning out the lights, letting the wind from the storm bluster through open doors and windows, and kidnapping various members of the cast when the lights go out.

The entire cast as I mentioned is very broad, and as Dave Sindelar mentions in his own review from Fantastic Movie Musings and Ramblings, this makes the “scared-servant” reactions of the African-American butler slightly easier to take, though barely, as everyone is doing wild takes in this film practically simultaneously. It’s still marred by the horribly written title cards that force the character to speak in stereotyped dialect, and worst of all, the character being named “Snowball.” But it gets even worse: apparently this was the known moniker of the actor playing the part: Curtis “Snowball” McHenry.

As Dave also notes, this one is played with a significant amount of energy which helps put over what is otherwise an unremarkable story and set of gags. The comic actors are all just that – comic indeed in both facial expressions and body language, and as mentioned above, that goes a long way in a film like this.

Of particular note is a scene where Jimmie and the butler end up sliding in a hallway in such a way that it’s almost balletic, a la Keaton and Lloyd. This is swiftly followed by a similar scene in the kitchen where the pair come across a figure in a sheet, and then back to the hallway for more slipping-sldiing antics. This fancy footwork continues for much of the rest of the short, and frankly, it never gets old – it’s always delightfully amusing.

Of course, the figure in the sheet is soon revealed to be the abducted uncle, but not before the butler is thoroughly scared out of his wits.

The film winds down some as the culprit abandons the scare tactics and just reveals himself, commencing in some chase gags as the villain attempts to steal whatever money’s left in the house.

The silent movie standby is utilized to help wrap things up: Buddy the dog goes to get help and retrieves the sheriff to save the day.

A rather inauspicious end to a short that had its moments, but is noted more for the remarkable performances of a game cast than for its content. 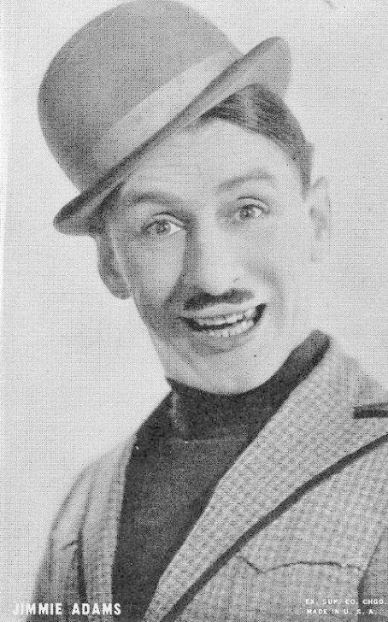 SPOTTED IN THE CAST: Let’s start with the director, Harold Beaudine. He is, indeed the brother of William “One-Shot” Beaudine, that ubiquitous and tireless veteran of countless horror-comedy films, low-budget horror flicks and TV episodes. It seems Harold wasn’t quite as prolific, directing primarily shorts through 1931 and then getting out of the business. Along the way, he did do another Jimmie Adams short called Oh, Mummy that may have been a horror-comedy (my research to date is showing that one to be a lost film – if anyone out there knows otherwise please let me know), and Seeing Things, a William Demerest old dark house comedy short complete with that trusty old standby: if you can stay in this “haunted house” for the night, you’ll inherit a fortune!

Billy Engle features here as Jimmie’s uncle, and he went on to appear in a slew of shorts and features, including many comedy efforts alongside the likes of W.C. Fields, Laurel & Hardy, Wheeler & Woolsey and at least two other notable horror-comedies, Buster Keaton’s The Gold Ghost and the Three Stooges’ Flying Saucer Daffy.

Eddie Baker is the bad guy and he also has copious credits, including work with Charlie Chaplin, W.C. Fields, Charley Chase, Harry Langdon and other comedy legends. His horror-comedy credits include the Joe Besser short, ‘Fraidy Cat and the man who dunks Ollie in the lake in Babes in Toyland, aka March of the Wooden Soldiers.

BEST GAGS: As stated above, no real gags here but lots of wonderfully rubbery flailing arms, funny faces and fancy footwork. Light horror-spoof content, with masks and sheets and blowing wind providing most of the “scares.”

BUY THE FILM: This short is available from Animation historian Tommy Stathes on his DVD, The Tom Stathes Halloween Cartoon Reel which can be ordered from Cartoons On Film (just click here). In addition to this Jimmie Adams live-action comedy, the DVD includes nine wild silent animated cartoon shorts in the same, things-that-go-bump-in-the-night horror comedy tradition.