A SERIES OF SCARES 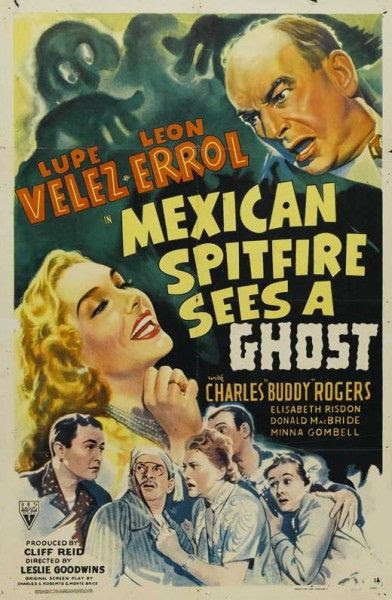 As I mentioned then, a short-lived Great Gildersleeve movie series was also attempted, including the horror-comedy entry, Gildersleeve's Ghost.

One of the more fun aspects for me in researching and writing my Scared Silly book is the variety I'm encountering. From silents to early sound films, from black and white to color, from shorts to features, from films with huge stars to those with little-known players, there is a plethora of spooky kookiness to be had.

Among the classic horror-comedy films from the era I'm covering are several "series" entries.

Popular through the '30s, '40s and '50s, the film series were just as they sound: a series of feature films featuring recurring characters. The most enduring of the "series films" were probably the mysteries - detectives as diverse as Sherlock Holmes, Charlie Chan, the Thin Man, the Crime Doctor, Boston Blackie and many more appeared in film-after-film, story-after-story. Likewise, adventure heroes like Tarzan and Jungle Jim also thrilled audiences in multiple installments.

The "series" films, along with the shorter two reel cliffhanger serials which presented a new "chapter" week-after-week, anticipated the advent of television's popularity. It's interesting that some managed to hold on into the 1950s just as TV's episodic presentations took more of a hold of the public's imagination.

Action heroes and crime-fighters weren't the only ones cavorting across cinema screens in the days of the "series" film: comedy characters also had a shot at developing audiences over a span of several exploits.

The longest-lasting in the feature film comedy series sweepstakes was The Bowery Boys. Their personalities were so strong and the talents of their performers so accomplished that it's a toss-up over whether to refer to it as a "series" or whether to just consider it the work of a great comedy team alongside the likes of The Little Rascals and The Three Stooges. The team logged several horror-comedies under their belt (as did their earlier incarnation, The East Side Kids).

There's a half-dozen "series" entries I'm really looking forward to watching and reviewing in addition to the Bowery Boys' laugh-fests. It would almost be a baker's half-dozen if I included Bert Gordon's How Dooo You Dooo?! but it's hard to determine whether to include it or not. Another radio clown, Gordon specialized in Russian dialect characters. In the movies, the characters all went by different names (including his most famous moniker, "The Mad Russian"), although the accents, personalities and mannerisms remained generally the same! So maybe that's an unofficial series? The jury is out...

Meanwhile, here's a brief run-down of the series entries that will be reviewed in my "Scared Silly" book:

Topper Returns: some may argue that the whole three-film series is a horror-comedy, but it really isn't. The first two films, Topper and Topper Takes a Trip are more in the "friendly ghost" genre. The third film in the series, Topper Returns shakes things up by being a bit of an "old dark house" spoof and bringing some atmospheric chills to the mix.

Mexican Spitfire Sees a Ghost: a series built around the superlative talents of Lupe Velez, a multi-talented actress from Mexico and a fine comedienne. Sort of Lucy and Ricky rolled into one! As if the powerhouse Velez wasn't enough, the producers added rubber-legged comedy star Leon Errol to the films as Lupe's Uncle Matt!

Francis in the Haunted House: the talking mule closed out his gabby series with this entry that has him witnessing a murder and getting mixed up with Mickey Rooney and an allegedly haunted house.

Blondie Has Servant Trouble: the popular comic strip became a popular film series with Penny Singleton and Arthur Lake portraying Blondie and Dagwood Bumstead. Servant Trouble was not just one of the best entries in the Blondie series, but is also a terrific, exemplary horror-comedy film in general.

Henry Aldrich Haunts a House: Henry Aldrich began life as a secondary character in a stage play, followed by the entire Aldrich Family becoming big radio stars. A teenage humor spoof, Henry and his family would also be hits in comic books and on TV and help influence everything from Andy Hardy movies, the Archie comics and TV's Dobie Gillis and Happy Days.

Now, enjoy a clip from Henry Aldrich Haunts a House: