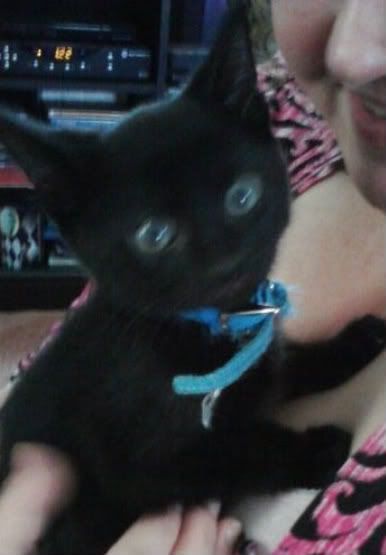 Greetings Scared Silly fans! I have some exciting news for you. Yesterday we adopted a cute little kitty named Poe! Like our beloved Max who we lost last year (read about him when you click here), Poe is a black male and so far he has the same sweet disposition as Max.

A couple of really cool things: first, when we visited the couple giving the kittens away (Poe had some brothers available, too), I noticed a cartoony Frankenstein Monster nutcracker in the home. And the husband was wearing a Universal Monsters t-shirt! I told them all about Scared Silly and "Archie's Weird Mysteries" and they mentioned being fans of the latter.

Then there's the new kitty's name, Poe. My wife was the one who thought Poe (as in Edgar Allan, naturally) would be a good name (even before we learned the folks adopting him out were classic monster fans), and I quickly concurred. After all, I grew up with Edgar Allen Poe stories.

Furthermore, two of my favorite horror-comedies feature black cats and are loosely (very loosely) based on the Poe tale, "The Black Cat." You can read those reviews when you click on the titles below:

So here’s to Scared Silly’s new mas-cat – long may you mew!