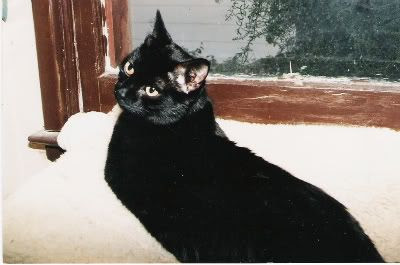 This may seem like an odd post. What does a cat have to do with "horror-comedies?" Believe it or not, there is a connection.

Max was my wife Barbara's cat - she raised him from a kitten. I met Max in February, 2001 shortly after meeting Barb. I was not raised with cats, wasn't around cats much and didn't have much knowledge about them. Initially I thought it odd how much Barb interacted with and doted on this cat.

Then Barb and I got married in 2004 and Max moved in. Barb was worried that Max wouldn't take too well to having his "Mommy" share her affections with me (let alone the two other cats who came in the deal - Diva and the late Griffin).

But a wonderful thing happend... Max adopted me! We became the best of pals. He loved having a daddy he could take naps with and hang out with.

Max was a myth-buster. The #1 myth he dispelled for me was the idea I had that all cats were completely selfish and nasty. Max was not this way. He was very, very sweet and demonstrative about the love he gave - you didn't have to meet his needs to get his love. He would often just show his love out of nowhere (something I can't say for the other two cats).

Max had two cuter-than-cute pieces of schtick he performed. One was what Barb calls "cute boy" - where he would be laying down and just tilt his head while making the cutest face and covering his face with his paws. The other was a roll over... yes, this cat when in a state of sheer bliss (usually over being let outside to walk around the backyard or sometimes just because he was happy to be with us) would actually drop and roll to show his pleasure. 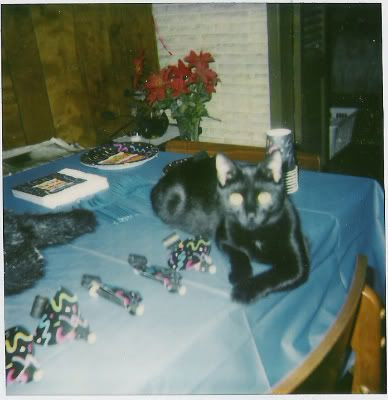 The other myth Max busted was the silly superstition that black cats are somehow "evil" or "scary." Max was anything but! He was sweet for starters, but he was also more prone to be the "scared" than the "scarer!" He was primarily afraid of small children and babies. Once we babysat the baby of a friend, and Max actually hid himself in the farthest room he could, using a shoebox for a litter box rather than the nearby litter box in the hall, for fear of seeing that baby!

I mentioned at the top of this post that Max did have a connection to horror-comedies, beyond the obvious lark that he was a black cat. We used to joke that the Hugh Herbert movie, "The Black Cat" (you can read my review when you click here) was named after Max. We built up this scenario that it was initially one of Max's favorite films, but ultimately wore thin with him as I would often put it on (it was a Netflix "instant view" selection after all) only to fall asleep within moments of the film's credits! I was just so familiar with the film that I found it something fun to nap to. In the way we so often did, my wife and I had a "voice" for Max E. that we would use (like ersatz ventriloquists) to have "him" express his feelings. We'd often have him saying, "you fell asleep to that movie again, daddy? I'm sick of it!" :)

Max was nearly 18. The past few days of humidity were tough on him. We did all we could - we kept the a/c going, always had a dish of ice cubes and cold water nearby, used cold compresses, etc. But the humidity wasn't the actual problem - it just served to bring to light a grave internal condition that Max's feline instincts did a great job of masking. He had a tough evening, and was suffering. We just had to let him go. This came just a few minutes after midnight on Barb's birthday of all days. But we have our cherished memories and will never forget this special little life that brightened our world for so many years. While I was only truly involved with Max for the past 6 of his nearly 18 years, I can honestly say that I was mightily blessed to have him in my life, and to call him my "son." Goodbye Max - we love you & miss you forever! 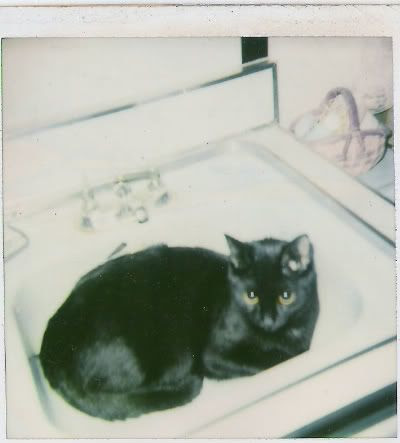 Posted by Paul Castiglia at 8:05 AM