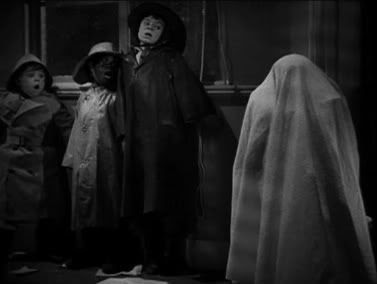 PLOT: Spanky, Alfalfa, Buckwheat and Porky concoct a plan to skip school the following day so they can go to the circus. The plan: secretly leave a “doctored” (as in “allegedly from a doctor”) note on the teacher’s desk stating that the four-some are sick. When the teacher informs them that she has circus tickets for the entire class, the quartet must retrieve the note… but now the school is locked! Returning after dark (and after the janitor has gone asleep) the kids have one spooky encounter after another. Are real spooks out to get them, and will they ever make it to the circus?

REVIEW: As promised, since February is a “short” month, I’m reviewing nothing but “short subjects” this month. For the uninitiated, “shorts” were part of the “extra added attractions” offered to movie-goers along with the cartoons, newsreels and movie serials. They ranged in length from one reel (approx 10 minutes), to two reels (16-20 minutes) to three reels (30 minutes).

Because of the shorter length of the films being covered this month, some of my reviews may be shorter than usual. Case in point: today’s review of a film that is among the shortest of horror-comedies being highlighted in “Scared Silly.”

“Spooky Hooky” is a very short 10 minutes. There isn’t a whole lot of content in this one reel “Our Gang” (aka “Little Rascals”) short. Prior to 1936, these famed comedy shorts featuring “kids being kids” were in the two reel 20 minute form. When taken as a whole, the series may have suffered a little in both formats. The 20 minute shorts left more room for character nuances but many were also apt to have more dull patches in-between the free-wheeling fun. Meanwhile, the 10 minute shorts moved so fast that there was hardly any room for character development at all, let alone nuances. Perhaps a happy medium would have been the preferred 16-17 minute lengths of the Three Stooges shorts.

One of the more prolific directors of the series, at least once the switch was made to single-reel entries was Gordon Douglas. Douglas knew how to keep the pace up, and while the manic energy was often a mask for the fact that there wasn’t much of a story to tell, some of the most memorable images and scenarios in the “Our Gang” shorts come from Douglas’ films. Such is the case with “Spooky Hooky.” For people who grew up watching the “Little Rascals” on syndicated TV, this entry’s images (and sounds) are fondly remembered.

Let’s start with the letter that Spanky has concocted. It is full of misspellings, some that are hysterical. The camera lingers on the letter long enough for viewers to not only read but retain its contents. For those who saw this short over and over again on TV, the spelling of “new monia” is a lifelong memory. 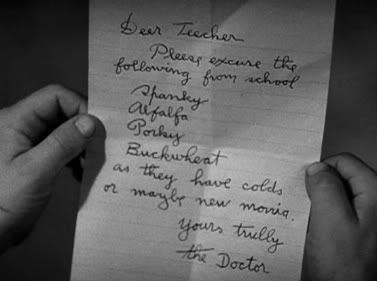 When the kids return to the school after dark, there are more fondly-remembered moments – even before they get into the building. First, Alfalfa, Buckwheat and Spanky are startled by the weird noise that Porky’s pocket-sized accordion-like noise-maker. Then Buckwheat is left to stand guard while the others sneak into the schoolhouse, and he promptly sits on the noise-maker! Startled, he jumps up and runs into the brush, where the sinister eyes and spooky hoots of an owl await.

The short moves into overdrive from here. As the kids open the window, the wind blows all the papers (including their letter) off the teacher’s desk. They flip the light switch on, but a bolt of lightning immediately shorts the lights out. Meanwhile, Buckwheat has climbed inside to join the others, insisting that he’s seen a spook.

Buckwheat begs to differ, but Spanky is still adamant that there’s no such things as spooks… until he, Buckwheat and Alfalfa see one standing nearby and waving its arms! Actually, it’s just Porky who has found a sheet and put it over his head (another image everyone remembers).

Thankfully the kids find the note and are happy, but then Porky goes into another room and starts throwing light bulbs onto the floor. At first the other kids are scared… until they figure out that it’s just Porky again. However, this wakes up the live-in janitor, who opens his creaky bedroom door to check out the commotion. The kids think it’s Porky playing around again, until Porky sneaks up behind them. When they realize that Porky ISN’T the one who opened the door, they panic in fright again.

Each kid goes to hide, leading to the main set-piece of the short, and surely its most remembered bit: Buckwheat backs into a corner where an anatomical skeleton on wheels is kept, and the hands of the skeleton get caught on the back of Buckwheat’s raincoat, giving off the impression it is following Buckwheat. Of course, when Buckwheat looks behind him and sees the skeleton he runs, so the effect is that the skeleton is running after him! 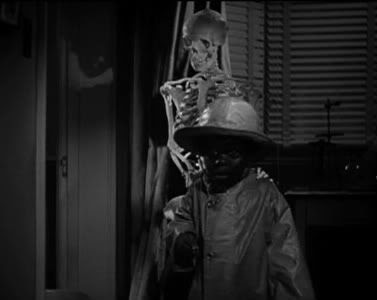 The spectacle of the skeleton “chasing” Buckwheat scares everyone, especially the janitor, who is involved in two memorable sight gags himself. First, his triangular night-cap stands straight up to indicate fright, and then he runs right through the door, leaving his silhouette behind just like in cartoons.

After all is said and done, the kids’ efforts are for naught – they really do end up with colds from being out in the rain, and can’t go to school (or the circus) after all!

BEST GAGS: As previously mentioned, from the owl scaring Buckwheat, to Porky scaring the other kids by wearing a sheet, to the slam-bang skeleton chase ending, this short is loaded with great sight gags.

SPOTTED IN THE CAST: As often happens in an “Our Gang” short, the adult supporting cast is where you’ll find some familiar faces.

The teacher, Miss Jones is played by Rosina Lawrence. A regular at the Hal Roach Studios that were home to both Our Gang and Laurel & Hardy, Rosina appeared several times with each. In fact, she played teachers in “Our Gang” shorts several times – called Miss Jones in at least three entries and Miss Lawrence in three other entries. One of her biggest roles was as the heroine in Laurel & Hardy’s classic feature, “Way Out West.” She also had notable roles in the all-star bio-pic “The Great Ziegfield”: and alongside Warner Oland in “Charlie Chan’s Secret.”

Dudley Dickerson plays the janitor. He was one of the premiere African-American comic actors of the 1930s and ‘40s. Although Dickerson and his contemporaries like Mantan Moreland, Willie Best, Stepin Fetchit and others have been criticized over the years for their wide-eyed performances in servitude roles that often required them to act cowardly and scared, the charge is unfair to these fine performers. First of all, they did not have control over the types of roles that were offered to them, and second of all, their scared antics were really not much more different from the wildly physical reaction comedy of Lou Costello, Bob Hope, Jerry Lewis and others who appeared in horror-comedies. Last but not least, they were wildly talented and always gave their all to ensure lively performances. Dickerson in particular was a horror-comedy stalwart, appearing in many such shorts and features alongside The Three Stooges, Hugh Herbert (in fact he and Hugh were practically a comedy team in their films together), Schilling & Lane, Andy Clyde, Harry von Zell and others, mainly at Columbia Studios. He also appeared in entries for several series including the Boston Blackie, Lone Wolf, Tarzan and The Falcon.

BUY THE FILM: “Spooky Hooky” has been released on DVD at least three times in collections that range from a handful of shorts to a collection containing all the sound shorts originally produced at Hal Roach Studios. Buy them here:

FURTHER READING: Without question, the only book anyone will ever need on the team is “Our Gang: the Life & Times of The Little Rascals” by Leonard Maltin. And on the internet, “The Haunted Closet” recently posted a nice photo-journal recap of the various horror-comedy entries featuring the endearing and enduring kid gang (special thanks to Bill for allowing me to borrow some of the images).

Since “Spooky Hooky” was a short, there isn’t a trailer for it. I couldn’t find any scenes online, either. Instead, please enjoy this montage reel of various Little Rascals clips that Cabin Fever put together to promote their DVD release: