SEE ABBOTT & COSTELLO TANGLE WITH A GIANT OF MONSTROUS PROPORTIONS... ON A GIANT MOVIE SCREEN!!! 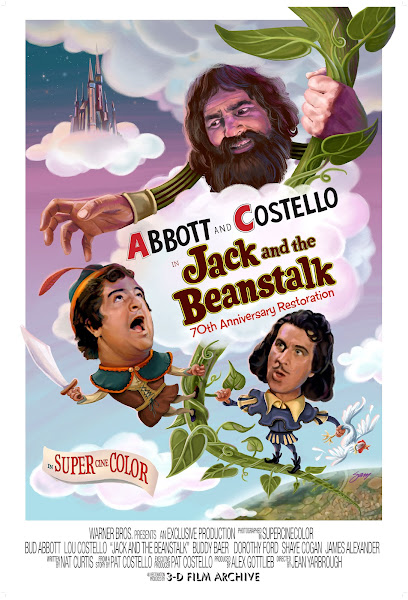 Greetings Scared Silly fans! It's that time of the year again... time for the West Orange Classic Film Festival once again! This year’s theme is “Fabulous Fables & Magical Myths” (click here to see the full array of films) and I’ll be participating in two of the screenings. One I’ll be hosting, and the other will feature me as a guest-speaker.

In years past, I’ve spoken at Laurel & Hardy and Abbott & Costello screenings, but this year it will be a little different. This year we are showing an Abbott & Costello film, but instead of me speaking I’ll be introducing a wonderful group of guest-speakers: Bob Furmanek and Ron Palumbo, co-authors of the book, “Abbott & Costello in Hollywood,” along with two members of Furmanek’s team from his 3D Film Archives movie restoration team, Jack Theakston who handled the visuals and Ray Faiola who handled the sound.

The Bud and Lou opus being featured this year is JACK AND THE BEANSTALK. While not a horror-comedy per se, it does feature one heck of a (at least semi)-frightening giant! Best of all, it is being presented in a stunning new 4k restoration that restores the film to its original SuperCinecolor splendor.

Some quick facts about the film, courtesy of Mr. Furmanek: Production of Abbott and Costello's first color feature film, JACK AND THE BEANSTALK began on July 9, 1951 at the Hal Roach Studios in Culver City, CA. This is the famous studio where Hollywood's other legendary comedy duo, Laurel & Hardy filmed the majority of their movies. Taking a page from the famous WIZARD OF OZ, the film was noted for having short sepia opening and closing sequences that bookended a rousing, comedy-fantasy adventure in-between that was filmed in the vibrant colors of the SuperCinecolor process.

The final film was released in 1952 and distributed by Warner Brothers. Lou Costello's Exclusive Productions owned this film but sold off the rights in the mid-1950's. Unfortunately, the original 35mm master materials (camera negative, color separations, fine grain master positive) no longer survive, however Bob Furmanek and team were able to create a restoration mastered from archival 35mm SuperCinecolor positive print elements and released just in time for the film's 70th anniversary. 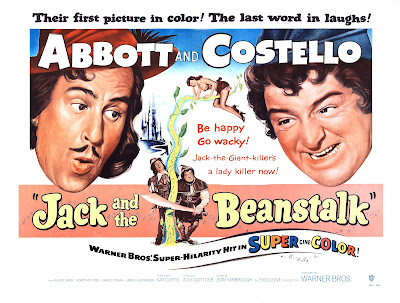 The film held its 1952 premiere at the Fabian Theater in Paterson, NJ - the birthplace of Lou Costello. Now, the restored version of the film also gets a New Jersey premiere at the West Orange Classic Film Festival on Sunday, January 15th at 2PM, at the AMC Dine-In Theater at the Essex Green Shopping Center in West Orange, NJ. Quite fitting, as Bud Abbott was born in New Jersey (Asbury Park), too!

Starring alongside Bud Abbott and Lou Costello in the film is Buddy Baer as the giant. Baer was a championship boxer-turned-actor, just like his brother Max, and he was also the uncle of Max Baer, Jr. - "Jethro" on TV's THE BEVERLY HILLBILLIES. Other cast members familiar to fans of vintage films include Shaye Cogan, Dorothy Ford, Hank Mann, Joe Kirk, Bobby Barber, and in a special bit of casting, Mel Blanc, famous for voicing countless cartoon characters including most of the legendary Looney Tunes gang, doing the voices of forest animals.

Tickets for this are selling fast, and only available on Eventbrite. Click here to order yours now – these won’t last!

Quick plug for my other upcoming appearance at the festival: On February 5th I’ll be speaking at a screening of THE 7th VOYAGE OF SINBAD, the spectacular fantasy-adventure featuring magnificent stop-motion animation by the legendary Ray Harryhausen. Check back here soon for more info on that.

In the meantime, enjoy this trailer for the 4k restoration of BEANSTALK we’re screening this Sunday. I’m sure you’ll find this stunning… and even better if you come by on January 15th to see it in all its glory on a huge screen, the way it was meant to be seen!