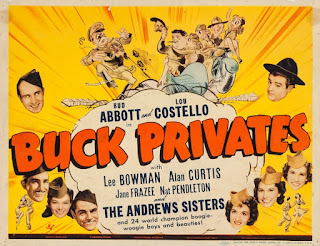 Greetings Scared Silly fans... it's that time of the year again. Once more I'll be speaking at the West Orange Classic Film Festival. Although I won't be screening any horror-comedies this year, I will be talking about two very dear friends of ours: horror-comedy royalty, Abbott & Costello! It all happens on Sunday, March 13th at 2PM when I return to speak at the festival after a three-year hiatus (due to a brief stint living on the opposite coast as well as the pandemic shuttering the event last year). It will, in fact be my sixth year speaking there.

It all began for me in 2014 with a sold-out screening of ABBOTT & COSTELLO MEET FRANKENSTEIN, and now I’m honored to present New Jersey’s favorite sons Bud and Lou once again in the film that put them on the map, BUCK PRIVATES.

As always, I’ll be introducing the film and doing a Q&A afterward. It’s one of Abbott & Costello’s best, and in my opinion simply one of the greatest comedy films of all-time.

Thanks go out once again to the festival’s organizers, Ken Mandel and John Chasse for inviting me to take part. Thanks also to Pat Mitrano and the West Orange Arts Council under whose auspices the festival screens forward. 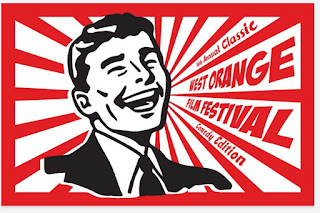 The event takes place at the AMC-Dine-In Theaters, Essex Green Shopping Center, 495 Prospect Avenue, West Orange, NJ 07052. One thing that has changed from past years is that tickets for this year’s West Orange Classic Film Festival are not available through Fandango or the box office. Instead, this year’s tickets are being sold exclusively through EventBrite. If you have trouble with the online transaction, you can tell someone manning the table out front of screening room 7 and pay on the spot in cash.

Tickets for this special event are $14 per person and are available to order at the following link: 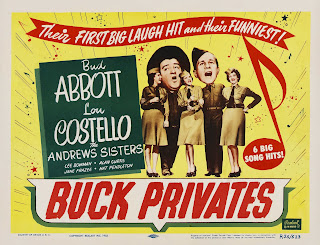 I should also mention that BUCK PRIVATES is the final film for this year’s festival. The festival is halfway over as I post this, but there are still a couple of films to go before Abbott & Costello return, including one that will be of particular interest to Scared Silly fans, YOUNG FRANKENSTEIN. Noted film critic Stephen Whitty will speak on that Mel Brooks classic on Sunday, February 27th and will return again on Sunday, March 6th for the Billy Wilder opus, SOME LIKE IT HOT. All showtimes are 2PM.

BUCK PRIVATES is the final film of the 2022 West Orange Classic Film Festival, which has featured an "All-Comedy" theme. The theme was chosen due to everything we've all faced the past few years. And speaking of which, please note the following:

I hope to see you on Sunday, March 13th at 2PM for Abbott & Costello’s BUCK PRIVATES!
Posted by Paul Castiglia at 12:00 AM