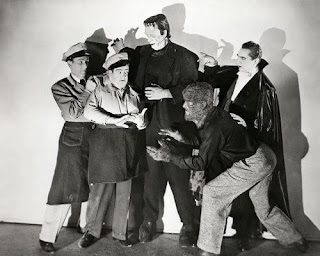 Now here's something this early new year for all classic monster fans to get excited about: this weekend, Universal Studios is going to run some of their most legendary and popular horror films in their entirety on their "Fear: the Home of Horror" YouTube channel. And the fun will last the whole week through!
Prior to this weekend, Universal has run trailers, clips, and other short videos about their classic horror films, but this is different: these are the films from beginning to end, in their entirety!
There are some amazing movies scheduled, and of course, I encourage any Scared Silly fan to be sure to partake of these essential entries, for if it wasn't for their effectiveness and popularity, the horror-comedy films spoofing such terrors wouldn't be as enduring.
Some personal favorites of mine are a pair directed by James Whale: The Bride of Frankenstein and The Invisible Man.
The former is just a total work of art on multiple levels, mixing horror, comedy, social commentary, fantasy and more. Many have dug deep into its contextual layers, and I recommend anyone read up on what makes the film so unprecedented in its time... but of course, I recommend you watch it, first!
As for The Invisible Man, well, it's just wow... the juxtaposition of its humor against the homicidal madness of its protagonist is jarring to the max.
The centerpiece for Scared Silly fans, of course, will be Abbott & Costello Meet Frankenstein. You can read my in-depth review of the king of all horror-comedies by clicking on the title... and if you're anything like me, I'm sure you won't mind watching it for the umpteenth time when it appears on YouTube!
The way this will all work is that Universal's YouTube Fear channel will premiere specific films Friday, Saturday and Sunday... and thereafter, the films will be up on the site to view again throughout the following week!
The times for each of the days are:
Eastern Time – 3pm
Pacific Time – 12 noon
Central Time – 2pm
Mountain Time – 1pm
Argentina Time – 4pm
UK/England – 8pm
Europe/Scandinavia et al – 9pm (21:00)
Eastern Australia – 3am (the day following each date below)
Western Australia – 6am (the day following each date below)
Japan (Tokyo) – 4am (the day following each date below)
Here is the schedule:
January 15, 2021 Dracula (1931), The Mummy (1932)
January 16, 2021 Frankenstein (1931), Bride Of Frankenstein (1935)
January 17, 2021 The Invisible Man (1933), The Wolf Man (1941), Abbott And Costello Meet Frankenstein (1948)
Click here to access the YouTube channel where these films will be available. You'll have a monstrously good time!!!
Until this weekend, enjoy this featurette from Universal's YouTube page about Abbott & Costello's multiple meetings with monsters!!!
Posted by Paul Castiglia at 3:00 AM