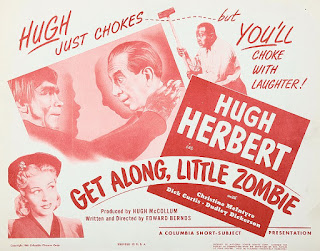 PLOT: Real estate agent Hugh Herbert must sell a creepy old house on the hill whose owners were murdered. Aided by his hired chauffeur, Dudley Dickerson. Unbeknownst to the duo, an elderly couple are squatting in the house... and they just happen to have a zombie slave on hand to scare everyone away! Will Hugh and Dudley manage to escape both the zombie’s clutches, and the right hook of Hugh’s prospective client, whose wife Hugh accidentally kissed?!

REVIEW: It’s time once again to re-visit our old friends, Hugh Herbert and Dudley Dickerson. They were teamed (unofficially, as these were technically part of the Hugh Herbert series – but by all rights, he and Dudley should have been co-billed) by Columbia in a quartet of horror-comedy shorts to wonderful results.

I’d say this short is barely indistinguishable from the countless other Columbia scare comedies (and a few RKO entries, too)… except that would be a half-truth. Because it actually has three things going for it to set it apart just enough for me to edge out my rating to three stars.

First, this actually manages to be a mash-up of the two types of shorts Hugh Herbert specialized in while at Columbia. The horror-comedy team-ups with Dudley Dickerson were the outliers. The more ubiquitous premise of the Herbert shorts were marital comedies of errors and domestic farces. Like Leon Errol over at RKO, Hugh got mixed up in many a misunderstanding where his wife wrongfully accused him of being on the make, and yet he was mostly innocent (certainly with a much better track record than Errol).

Get Along Little Zombie starts off as if it’s going to be yet another of the marital misunderstanding shorts for Herbert. It begins innocently enough, with Hugh bringing flowers home for his wife. Distracted while fumbling for his keys, he accidentally goes to the wrong door and kisses the neighbor’s wife, mistaking her for his own. Appalled, the neighbor’s wife tells her husband, and the irate spouse chases Hugh down. Hugh meets Dudley while ducking into a broom closet, and after getting an assist from Dudley to throw the angry hubby off Hugh’s trail, Hugh hires Dudley to drive him.

Hugh’s domestic strife continues when his wife and her friends walk into the apartment right after Hugh removes his vase-soaked trousers. But that’s a throwaway bit. The bit with the angry husband actually winds up continuing, as it’s integrated into the rest of the short, because don’t you know it, the house realtor Hugh represents is being considered for purchase by the prickly man and his wife.

The house, of course, is a spooky old place. It’s also inhabited. Occupied by an elderly couple who introduce themselves as Mr. and Mrs. “Graves” – the groundskeepers. And inexplicably (as in, it’s literally never explained) they somehow have a real live zombie of the Ghost Breakers and Zombies on Broadway variety to do their bidding. Perhaps it’s the couple’s son, run afoul of a voodoo priestess and cursed to an existence as a mindless, undead zombie slave.

This is a good place to note just how great a job the Columbia make-up department did with monster make-up for their comedy shorts. The zombie here is a really fearsome character, right in line with the scary fiends in the Collins & Kennedy short, Midnight Blunders; and such Three Stooges efforts as Idle Roomers and We Want Our Mummy.

As you’d expect, what ensues is a series of scares for both the prospective home buyers, and for Dudley and Hugh. There are owl-like eyes glowing in the trees with screech-like sound effects, and the address of the home is 1313 Mortuary Road, and that's just the star. The short pulls out all the stops, from secret panels to picture frames, to grabbing hands and waving hatchets; none of it terribly original. However, it’s how it’s played that ramps up the entertainment factor. Christine McIntyre, heroine (and sometimes villainess) of countless Columbia shorts including several notable Three Stooges entries, displays in full force how she could compete with the best “scream queens.” As her husband, Dick Curtis is frantic in protecting his wife, and in looking to clobber Hugh. 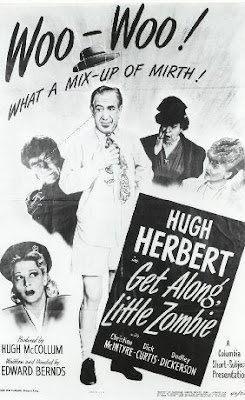 Hugh and Dudley navigate the scare scenes brilliantly, particularly in a scene where the zombie popping through a picture frame behind them keeps tapping each of them on the shoulder. Each thinks the other is pushing and shoving but when Dudley shows Hugh both his hands are free, he gets a load of the zombie and runs off hysterical! Hugh barely has time to react when the zombie grabs him, but he manages to break free. It’s all done with impeccable timing and energy that elevates the proceedings.

A real standout scene is a solo bit for Dudley wherein he runs into a room to hide, encounters the female groundskeeper, and begins to describe the zombie to her in hilarious terms, proclaiming, “he’d like to eat me up... maybe you don’t believe me, and I don’t believe myself, but I’ve seen it!” Dudley's soliloquy comes to an abrupt end when the zombie sneaks up alongside of him, just as he declares, “he was the ugliest-looking thing I ever did see!” A few minutes later, Dudley knocks himself out with his own booby trap, set for the monster, and proves once again how amazing a comic talent he was.

McIntyre also gets a chance at a solo spotlight when she mistakes the zombie’s breathing on her neck as her husband responding to her perfume (she’s looking in the other direction). Responding to what she thinks are her husband’s affections, she strokes the zombie’s facial hair, and realizes its not her beardless husband.

After a series of further clonkings, chases and scares, the younger couple join Hugh and Dudley in a getaway car… which promptly takes off with the zombie behind the steering wheel, as our heroes scream away! Suitably, the ending mirrors the entire short… one wild ride!

SPOTTED IN THE CAST: In addition to Columbia stalwarts McIntyre and Curtis, another familiar face, a Boniface with first name Symona, is on hand playing Hugh’s wife. A mainstay at Columbia who appeared in countless Stooges shorts including the horror-comedy, Spook Louder; Boniface had great training earlier appearing in some Hal Roach-produced shorts with Laurel & Hardy and Our Gang/the Little Rascals.

Jessie Arnold as the female groundskeeper played countless bit parts as old ladies, nosy neighbors and the like, all uncredited. Of interest to Scared Silly fans would be parts in the Harry Langdon/Oliver Hardy feature, Zenobia; plus some Universal horrors including The Wolf Man, Black Friday and The Man-Made Monster.

The ironically-named Jack Roper who portrayed Frankie the zombie actually had a prolific professional boxing career that included a bout with Joe Louis. His imposing frame made him perfect for playing cowboys, gangsters, bouncers, and yes boxers. He’s in the classic Wheeler & Woolsey horror-comedy, The Nitwits, and also makes appearances in Abbott & Costello’s In the Navy and Abbott & Costello In the Foreign Legion; as well as W.C. Fields’ late-career classics, The Bank Dick and Never Give a Sucker an Even Break.

HUGH: I’m scared. Are you?
DUDLEY: Oh not too much – I guess I was sort of born brave.

HUGH: Looks kinda’ spooky, doesn’t it?
DUDLEY: Yes sir, it kinda’ does.
HUGH: Well, of course we all know there’s no such thing as spooks.
DUDLEY: Of course not (then after Hugh walks ahead of him)... I hope!

DUDLEY: Let’s get out of here!
HUGH: Oh, stop your nonsense – there’s nothing to be afraid of here! Besides, I thought you told me you were a brave man?
DUDLEY: Yes sir, I AM brave… in the daytime!

(After Mr. Graves retrieves a meat cleaver from the room where Hugh and Dudley are staying)

DUDLEY: Mr. Herbert – is that thing what I think it is?
HUGH: Yeah, that was a meat cleaver.
DUDLEY: Or a Harlem Shampoo-er! If I see a man with a razor, I know exactly what’s on his mind… and that there chopper-offer is just like a razor. Only more of it!