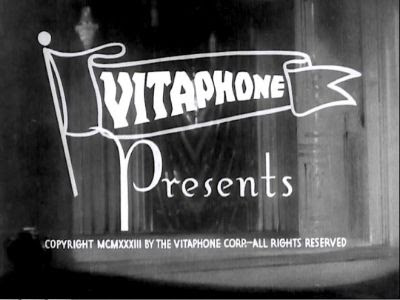 PLOT: Mantan (Mantan Moreland) arrives at the Acme Pawn Shop for his new job as night watchman. Tagging along is Steve (F.E. Flourney Miller) a friend to whom Mantan owes money. As the duo enter the dark shop, strange things begin to happen – namely disembodied voices are heard, fur coats come to life, washboards levitate and the arms of the rocking chair clutch whoever’s sitting in it! Craziest of all, a variety of miniature musical acts in a small diorama come to life and play one zany number after another!

REVIEW: This one reel short, running a brief ten minutes contains maybe four minutes of actual horror-comedy content. Normally, this would not be enough for me to grant a full-blown review but would instead place it in the “horror-onable mention” category.

However this short also has some historical significance. Not only does it provide a filmed record of some of the most exciting and influential African-American musical performers, it is also the screen debut of legendary comedic actor Mantan Moreland. Furthermore, being a “horror-comedy” it is a rather fitting debut, as Mantan would spend a great portion of the rest of his career acting “scared silly.” Last but not least, it teams Moreland with F.E. (“Flourney”) Miller, and the pair would continue to team afterward in a trio of other horror-comedy films. Both Moreland and Miller are important figures in the history of African-American entertainment.

Before we get to the history lesson, however, let’s talk about this short. Most of what you need to know about the film is already mentioned in the plot description above. Miller and Moreland move through their paces with ease and sell the gags just fine, but even by 1933 haunted house and scare bits in comedies had become so venerable that they needed just a little more oomph to truly score. The problem here is two-fold: the “spooky” motifs were used merely as fun pauses between musical sequences (it follows a pretty stringent pattern : a musical number followed by a scare scene with the comedians, then back to another musical number); and Miller and Moreland are winking at the audience – there’s no through-line narrative and at one point the pair even act uncharacteristically NOT frightened and start making requests of the band!

Adding to the short’s ineffectiveness is the fact that, with the exception of a few “scary notes” of music underlining the opening titles, none of the musical numbers have a spooky bent. They are all great, energetic pieces of music but nothing about the tunes – nor the outfits of the performers delivering them – indicates “horror comedy.”  Had they opted for a Halloween theme with costumes and goofy music that echoed horror notes with say, skeletal arpeggios via xylophone (the way so many great black and white Disney, Flesicher, Iwerks and Van Beuren cartoons of the 1930s did) the proper effect would have been achieved.

Despite its shortcomings, there is a certain amount of delight to be had in watching Moreland debut on the screen and match wits with Miller; as is there toe-tapping fun aplenty in the knockout performances of the musicians. 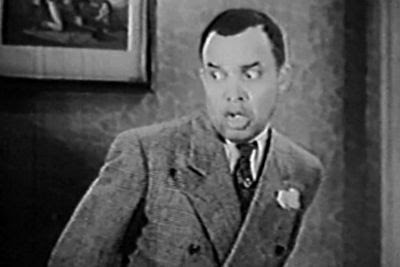 It’s actually music that provides the behind-the-scenes “glue” for this production: Miller wasn’t just a comedic actor with vaudeville roots; he was also a playwright and songwriter. He made huge contributions to African-America theater and in fact became part of a creative cadre in the field: his frequent collaborators were bandleader/musician/songwriters Noble Sissle (like Miller, also a playwright) and the legendary Eubie Blake. After the Broadway smash, Eubie Miller was even posthumously Tony nominated for his contributions to theater!

The connection in That’s the Spirit is that the musical numbers are headlined by Miller’s collaborator Sissle and his band. In essence, the Sissle band acts as emcees, introducing singer/tap dancer Cora La Redd (a fixture at Harlem night clubs in the 1920s and ‘30s) and the Washboard Serenaders (one of the superstar groups to come out of the washboard jazz craze). The music in That’s the Spirit is lively, driving, fun and above all joyous. Or to combine all those adjectives into one, exuberant!

Back to Mantan: this is his debut. He’s funny, but not hysterical yet. This no doubt can be attributed to the fact that he was coming from the stage burdened with a set of expectations that forced him into a broad archetype (nee stereotype) mold. Mantan simply hasn’t found his character yet in That’s the Spirit – his subtle nuances that audiences would come to embrace aren’t evident yet. It wouldn’t be too long before Mantan broke the mold though. Within a few short years he’d refine his character – wisecracking, sometimes scared yet often the smartest person in the room!

Inevitably, Mantan would become the standard against which all other African-American film comedians were measured (Eddie “Rochester” Anderson, Willie Best, Stepin Fetchit and the sublime Dudley Dickerson being chief among them), particularly when it came to being “scared.” The differences and similarities really come down to the degrees of intelligence displayed by the characters.

Once Mantan hit his groove, his character was special indeed. Imbued with an almost supernatural ability to predict trouble before it hit, he was often the one warning people to beat feet (and beating feet regardless of whether those he advised listened or not). He paired this with very smart and witty asides as well as the well-placed wise-crack to the delight of both first-run movie audiences and the generations who discovered him in the years that followed his career.

What’s perhaps most amazing of all is that Mantan maintained this special character not just in comedy films but also when he appeared in a bona fide horror or mystery film. He turns up in horror-comedy classics including Mexican Spitfire Sees a Ghost and the all-black horror-comedies Mr. Washington Goes to Town, Lucky Ghost and Professor Creeps (all of which he co-headlines with Miller); the pseudo-horror-comedies A-Haunting We Will Go (with Laurel & Hardy) and Cracked Nuts (with Shemp Howard, Una Merkel and William Frawley) legitimate horror films such as King of the Zombies and its sequel Revenge of the Zombies, and the hard-to-categorize oddity, The Strange Case of Dr. Rx (co-starring with Shemp once again in a film that actually involves them in a straight car chase scene – one chasing the other!). Most notably, of course Mantan had the recurring role of Birmingham Brown, Charlie Chan’s chauffeur in several entries of the Hawaiian detective’s movie series (including some with horror overtones including The Scarlet Clue, The Jade Mask and Black Magic aka Meeting at Midnight). This is the role for which Moreland is both best remembered and most beloved.  It is the crystallization of his comedy character, and while one could argue that Moreland often played the exact same character by other names in other films, the context presented by the Chan stories makes his role transcendent. In other films, Moreland was often a reactionary character – responding to the events surrounding him. In the Chan films he was often as much the catalyst behind the mayhem.  More importantly, he was key in moving those films along in an entertaining fashion… his lively antics keeping audience members interested in-between the by-the-books sleuthing and procedurals.

Mantan also has the distinction of appearing in the film that marks the divide between the “traditional” horror-comedy and what it would morph into in the modern age. Spider Baby (filmed in 1964 but released in ’68) is “black comedy” of a different sort than those Moreland starred in with Miller. Dark, edgy and disturbing, it pretty much wastes Mantan, both figuratively and literally – onscreen only briefly as courier, he is brutally dispatched early in the film, with no bits of comedy business to perform.

All tolled, That’s The Spirit is not one of the must-see entries for the die-hard horror-comedy fan. However, if you love Mantan Moreland or the kind of exquisitely fast, frenetic and fun Dixieland-inspired jump and jive music featured here, you’re likely to be entertained. In fact, based on that criteria, you can add half a star to my star rating.

MANTAN: I wonder what time it is?
DEEP, DISEMBODIED VOICE: 2 O’Clock!

STEVE: Say, you don’t believe in ghosts, do you?
MANTAN: I don’t doubt ‘em!

All the aforementioned gags work well here. While the fur coats coming to life and the washboard levitation is fun, the best inanimate object gag has to be the chair that Steve sits in. First his right hand rises independently while the sound of a creaking rocking chair plays, then his left hand rises. Then the arms of the rocking chair grab him around the waist!

The film also ends with a fun visual gag. Steve and Mantan finally decide they’ve had enough and run off – but when Mantan goes to run, he can’t move!  He slips out of his shoes which seem locked in place and bolts off.  His shoes then shuffle after him, the right and left each with its own voice declaring “waitaminnit, don’t leave us here!”

Steve has hand on Mantan’s shoulder while Mantan’s back is turned.

“Please tell me that’s you with your hand on my shoulder,” Mantan implores.

FURTHER READING: I make the following recommendation with a caveat, as some film historian friends have suggested to me that in addition to the facts, this book also contains an item or two of conjecture not necessarily supported by facts. Still, as the only book based exclusively on Moreland, you will find much of interest regarding the development of Mantan’s career and an excellent survey of his films. The book is Mantan the Funny Man by Michael H. Price which you can order directly from its publisher, Midnight Marquee Press when you click here.

Also worth a read is a blog post by Paghat the Ratgirl that focuses on the wonderful music in this short.  You can read it by clicking here.

Last but not least, the film is registered with the Library of Congress – you can see the details when you click here.
Posted by Paul Castiglia at 12:00 AM