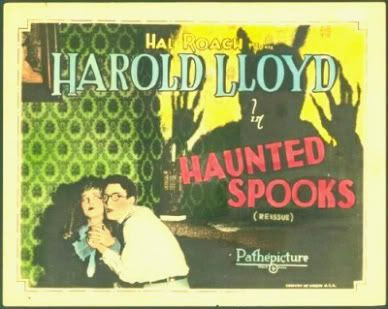 A quick head's up for all "Scared Silly" fans in the Manhattan area: this Saturday, October 8th, 2011 the Silent Clown Film Series presents "Scary Shenanigans on the 2nd Reel."

The Silent Clown Film Series is renown for its screening of vintage silent comedies with live piano accompaniment from musician Ben Model.

This special presentation is held at the New York Public Library for the Performing Arts, Dorothy and Lewis B. Cullman Center, Bruno Walter Auditorium. Showtime is 2:30 PM. Admission is free.

On the program: a 1928 Ko-Ko the Clown cartoon from the famed Max and Dave Fleischer animation studio titled "Ko-Ko's Earth Control," Harold Lloyd in "Haunted Spooks" (1920), Lupino Lane in Who's Afraid? (1927). Buster Keaton in "The Haunted House" (1921) and Our Gang in "Shootin' Injuns" (1925). You can read my reviews of the latter two films by clicking on their titles. Ultimately I will be reviewing the other live-action films on the program as well.

To whet your appetite here's a silent cartoon that isn't on the schedule this weekend, but is sure to scare you silly - Ko-Ko the Clown in 1928's "Ko-Ko's Haunted House" (note that this was duped from a print distributed to TV stations in the 1950s, hence the original movie studio logo being replaced):