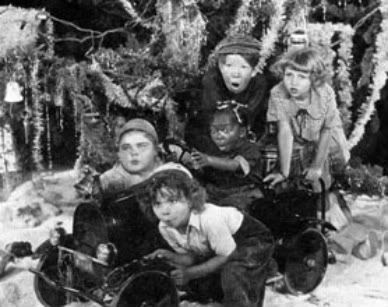 PLOT: In this silent short featuring Our Gang (aka “Little Rascals” – here played by Mickey Daniels, Jackie Condon, Johnny Downs, Allen “Farina” Hoskins, Joe Cobb and Mary Kornman), the kids are a bit too fervent in their games of “Cowboys and Indians,” leading their parents to threaten to knock down the gang's “hideout” (aka “shack”). Undeterred, the kids set out west after nightfall in search of real Indians. They stumble upon a mysterious house that is actually a prototype “magnetic house” full of tricks and illusions that an inventor has created in hopes of a big sale to amusement park investors. Taking shelter from the storm outside, the group get more than they bargained for when they trip all the mechanical “funhouse” features and are scared out of their wits! Can they get out of the house with their nerves intact?

REVIEW: The *** out of **** rating I gave this film is an average. Based on the opening portion of this short alone I would have given the film one star or maybe even half a star. That’s because the opening concerns itself with the Our Gang kids involved in fantasy role play scenario as cowboys on the lookout for Indians. Some of what happens in these scenes is amusing in a cute way, but hardly laugh-out-loud funny. There are also a few uncomfortably un-PC overtones regarding how Indians are referred to in the title cards (both the “narration” and the kids’ “dialogue”) – although one of the kids’ mothers does reprimand her son saying the Indians should be left alone – they haven’t done any harm. If I were writing a book about western-comedies perhaps I’d feel differently, but the opening segment of “Shootin’ Injuns” presents little promise for the horror-comedy fan.

Thank goodness for broken promises! Once the film puts our protagonists inside the trick “magnetic” house that the kids think is haunted, the short becomes a wild free-for-all of wonderful “scare comedy” and stunning – even to modern audiences – special effects. This is the first ever Our Gang horror-comedy and I can truly say that of all their similar shorts to follow, not one tops its “scare” moments (although “Shivering Spooks” comes close). And so, the “spooky” portions of this short get a four star rating from me.

Average it out and you get a solid 3 star rating.

For this review then I’m going to spend less time on the western elements so I can get to the horror gags quicker.

The film starts in quaint fashion with a title card informing us that “In the life of every boy there comes the desire to go out west…” The kids are playing that old politically incorrect chestnut of a game “Cowboys and Indians” in their clubhouse, which is complete with secret tunnel entrance and elaborate Rube Goldberg-esque contraptions (Joe Cobb blows through a hose to announce his presence then Mickie flips a switch that opens the shrub like a trap door for Joe to climb down) . Each of the kids is introduced with their non de plume - the name of the legendary western character they’re playing (Micky as General Custer, Jackie as Daniel Boone, Johnny as “David” Crockett, and Farina as “Pancho Farina”)… except for Mary, who has been excluded from the game for suggesting that “some of the Indians might want to keep on living.”

Mary isn’t excluded for long - she strong-arms the gang into letting her into their cowboy games by threatening to tell her Mom, who she promises will “do some real scalping” if they persist to keep her out.
The film quickly shifts gears. After being told their shack will be knocked down the kids decide they need to literally head “out west” to find Indians and agree to meet at 8PM to begin their trek (“We’ll be in a foreign country by morning”). They don’t get far when the spooky stuff starts happening.

The fun starts with Farina, who is hiding under a sheet in the back of a laundry wagon. When the driver sees him he gets scared. Then both Farina and his driver see sheets on a clothesline eerily fluttering in the wind. Farina exclaims, “Splooks!”

Joe Cobb gets caught up in tree branches and the dangling laundry while Mickie and Johnnie are nearby dealing with scares of their own. First a black cat loudly knocks objects off a roof. This is followed by a tire blowing out. Finally a howling dog and a gunshot from a rifle toting man trying to get some sleep sends the boys completely off the deep end.

All of this is just a warm-up, for as the title card tells us, “The old inventor had perfected his Magnetic House – A magic maze of mechanical mysteries.” Magnets, mechanics, strings and electricity, to be exact. The inventor is trying to sell the house to investors who plan to put one “in every big amusement park in America!” Whether intentional or not, the inventor’s house acts as kind of a connecting device to the kids’ own gadgets from their hideout shown earlier in the film.

Needless to say, once the kids are inside the house the pace picks up considerably. There are lots and lots of tricks the totally frighten the kids, including:

• Doors that open on their own
• Lots of creepy paper mache’ heads that pop out of the floor and figures that plop out of closets and sit up in bed shooting guns.
• Spooky smoke emanating from sink drains.
• Arms that pop out of cakes.
• Cabinets with dancing products on their shelves.
• Skeletons that appear and disappear… and some that even grab the kids!
• Revolving secret doors in the walls,
• A 3-D portrait on the wall with googly eyes that pop out and a necktie for a tongue that flails about.
• Legs that pop out of the wall to kick the kids in the seat of the their pants.
• Revolving panels in walls.
• Solid windows – they look like real windows but when the kids try to jump through they just hit the wall. .
• Staircases that collapse as the kids climb them, sending them sliding down to the bottom.
• Balloons with flourescenet scary faces painted on their surfaces float around.
• Scary clown and elephant imagery add to the fright-fest.

In his seminal book “Our Gang: the Life & Times of the Little Rascals,” film historian Leonard Maltin singled out two sequences as being the most creative (which in this film full of creativity is saying a lot):

• While running from a skeleton Farina actually freezes in place and a second shadow image of Farina actually leaps out of the skin of the original to accentuate how frightened the character is! Then Farina rejoins that shadow figure to become one again (this trick would be employed again in the classic sound era Our Gang short, “Mama’s Little Pirate”). 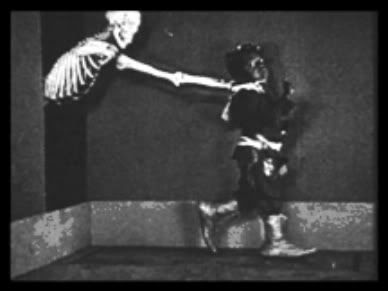 In the finale, the kids are saved by their concerned parents who have arrived on the scene… but not before the parents themselves are amusingly scared by the magnetic home’s tricks!

The sheer virtuosity and imagination at work here is unmatched even by some of the better horror-comedies, probably because it’s all so crazy that it’s unexpected – the viewer is surprised at every turn by the dizzying array of spectral spectacles on display. If you have an opportunity to see it on video, simply fast-forward to the haunted house scene and you will not be disappointed!

BEST DIALOGUE: This is a silent film so there isn’t any dialogue – just title cards. Most of the dialogue in this one is uncharacteristically mundane (the silents often had very witty title cards) or just plain politically incorrect, but Joe Cobb does get to make the understatement of the year (or at the very least this short) when he mutters “If I ever get outta' this alive, I’ll never run away from home a’gin!”

BEST GAGS: All the gags mentioned above!

SPOTTED IN THE CAST: A few notable adult actors. Richard Daniels, real-life father of Mickey plays the inventor here but often played Mickey’s dad (and other kids’ dads) in various silent Our Gang shorts. Rotund Martin Wolfkeil is Joe Cobb’s dad, “Tonnage.” Before Stan Laurel teamed with heavyweight Oliver Hardy, beefy Wolfkeil appeared in a variety of solo Laurel films. William Gillespie, playing yet another dad here has the most impressive resume of all, having had parts in several other Our Gang shorts as well as a half dozen classic Laurel & Hardy films (he’s the piano salesman in “The Music Box”), over a half dozen Harold Lloyd movies (including the classic horror-comedy “Haunted Spooks”), some Chaplin shorts and the sublime Snub Pollard short “It’s Gift,” where he played oil executive “Weller Pump.”

BUY THE FILM: This short has been released several times on various collections. The Lucky Corner, a site dedicated to Our Gang films has a listing of the various releases that include “Shootin' Injunss” that you can check out by clicking here.

FURTHER READING: There are two great blogs highlighting the horror comedies of Our Gang/the Little Rascals. Click here to read The Haunted Closet and click here to read Ghosts of Halloween Past.

As for books, the ultimate one on the kids is “Our Gang: the Life & Times of The Little Rascals” by Leonard Maltin. Buy the book here:

WATCH THE FILM: Since this is a short, and a silent one at that no trailer is available. However, you can enjoy this amazing clip: