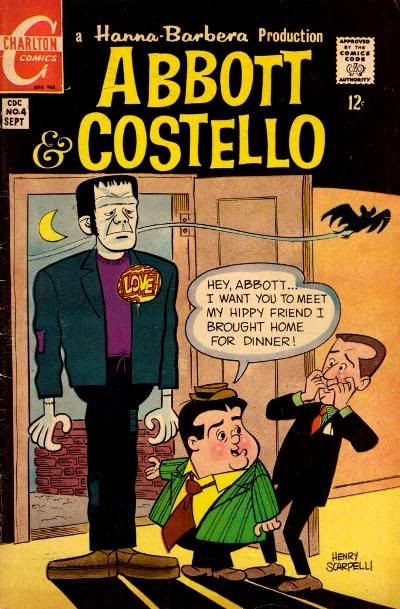 I was saddened to hear that my friend and colleague Henry Scarpelli passed away over the weekend. The news is being reported this morning in the Staten Island Advance. Click here to read it.

Henry was a journeyman cartoonist who worked for several major publishers, most notably Archie. I met Henry when I worked on staff at Archie and enjoyed the honor of having Henry illustrate three of my Archie Comics scripts. A detailed remembrance from Archie Comic Publications, Inc. can be read by clicking here.

In addition to teenage humor comics, Henry was known for drawing comics based on real-life personalities and TV shows. These comics included "Get Smart," "Hogan's Heroes" and "McHale's Navy" for Dell, "Jerry Lewis" for DC and "Abbott & Costello" for Charlton, among many others.

Scarpelli did many covers and interiors for the "Abbott & Costello" comic book and of course I've included the one that seemed most appropriate to this blog. Special thanks to classic comedy historian Brent Seguine for loaning the scan. You can see the complete Charlton Abbott & Costello comicography at the Three Stooges message board by clicking here and scrolling down...

...and you can watch the opening and closing credits to the 1960's Abbott & Costello animated TV series that Scarpelli did such a good job replicating here:

Posted by Paul Castiglia at 4:55 AM