The 2009 Boris Karloff Blogathon is underway!

During this week, over 100 blogs around the world are posting about the life and art of one of filmdom's most famous fiends, Boris Karloff. Click here to see a complete list of participating blogs at the Frankensteinia site. 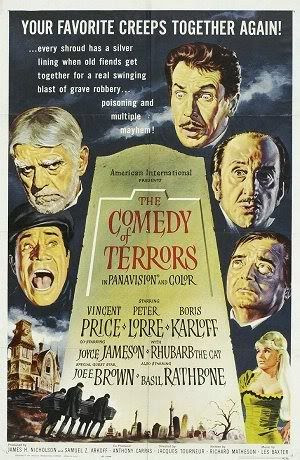 NOTE: The following review has appeared previously as part of a larger essay on the films of Vincent Price and Peter Lorre which I wrote for the book MIDNIGHT MARQUEE ACTORS SERIES: VINCENT PRICE. The book is filled with entertaining and informative essays by several writers on Vincent Price’s career. It is highly recommended and you can order it by clicking here.

While the following has been slightly revised for the purposes of this Scared Silly project, it does not follow the format of the previous Scared Silly reviews I have posted.

The ﬁnal ﬁlm in the Vince Price/Peter Lorre/Boris Karloff oeuvre is “The Comedy of Terrors.” Unusually for an AIP Vincent Price feature, we’re actually treated to an original story not based on Poe, although it does contain a satirical homage as a drunken Vincent recites “The Raven” poem, albeit changing a few lines: “...dreamed of gently, gently rapping... rapping gently with a hammer on a ba-by’s skull.” This ﬁlm begins right off the bat with a role reversal: Whereas Vincent was the reserved one in “The Raven” playing off Lorre’s clown, Lorre is now subdued and subject to Price’s antics. This even extends to Price’s character’s fondness for getting drunk, a character trait shared by Lorre’s characters in both The Black Cat sequence of “Tales of Terror” and “The Raven”. And drunk he is, hurling insult after insult at his pretty, young wife. When told he only berates her when he drinks, Price responds with glassy cool: “We escape the unendurable however we can!” Although assuming the drunken mantle previously held by Lorre, Price’s is a different sort of drunk. He is more eloquent, and while his barbs sting as much as Lorre’s, his are made with the fanciful vocabulary of an educated man, while Lorre’s drunks usually speak in the tongue of the Everyman. Price even admits he courted his wife to get a shot at her father’s undertaker business. Meanwhile, Price’s assistant Lorre holds a special place in his heart for the woman his boss so disdains.

One gets the notion that Price feels liberated after two ﬁlms with Lorre where he remained restrained in his co-star’s presence, not to mention the tortured souls he played in the various Poe ﬁlms. Price really cuts loose this time, delivering his lines with the most severe sarcasm and venom: “What I wouldn’t do to get her [his wife] down here as a customer!” he sneers as he peers into the cofﬁn workshop. He also mugs and vamps much more than in previous entries, a style he would perfect a couple years later on the “Batman” TV show as the egg-centric and egg-citable Egghead. Once again, the ﬁlm has a simple premise, but one which lends itself to great comic possibilities: faced with eviction, Price must raise funds, and since the undertaker business isn’t exactly knockin’ ’em dead, well, Vincent ﬁgures he and Peter better start doing the knocking (off) to get those customers in those coffins!

Price and Lorre receive game support once again. Boris Karloff is back as Price’s wife’s seemingly deaf, decrepit father. As he did in “The Raven,” Boris once again steals many scenes. Fellow character actor (and veteran of a few horror ﬁlms, as well as the most famous of all Sherlock Holmes) Basil Rathbone tears the screen apart as a man who just can’t quite seem to stay dead. It is a tour de force performance that also illustrates how underrated a comedy talent Rathbone was. Joyce Jameson is robust as ever as Price’s wife and opera singer wanna-be. And last but not least, there’s a crazy cameo by wide-mouthed Joe E. Brown as a Cockney cemetery keeper who just can’t get over the fact that for a place ﬁlled with stiffs, there’s sure a lot going on! 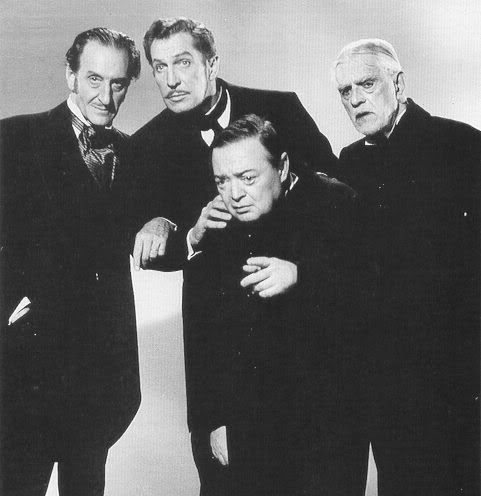 The mechanisms of this ﬁlm’s plot, more so than the others, force Price and Lorre to literally spend more time on screen teamed up in their endeavors. These scenes of the pair breaking and entering and attempting murder are among the most hilarious ever committed to ﬁlm, and rate favorably with the best of Laurel & Hardy and Abbott & Costello for sheer verbal and visual virtuosity. For example, a staircase of one of their prospective victims is lined with statues of busts on every step. Just as in a Laurel & Hardy ﬁlm, we see the gag coming, but even though it’s been telegraphed, the site of Peter Lorre bumping into the ﬁrst statue to topple each one in a domino effect still elicits laughter!

The laughable pompousness of Vincent’s gentle¬man drunk is beautifully underscored in the scene that follows, as Vincent attempts to explain his services to the widow:

“Allow me Madame in this moment of your most desolate bereavement to lift from your sorrow laden shoulders the burdensome tasks...”

“What?!” the confused widow answers, her head reeling.

“I’ll bury him for you,” shoots forth Price, all manner of proper speech suddenly shut down as if by remote control!

“The Comedy of Terrors” does lack one element that made The Black Cat segment of “Tales of Terror” and especially “The Raven” so special. It sticks to a linear though amusing plot, and for the most part seems played as scripted, with little or no evidence of improvisation, which is a real shame after becoming accustomed to Lorre’s delightful musings in the previous ﬁlms. Still, Lorre is given some choice dialogue from time to time: “Why did I ever escape from prison—it was so peaceful there!” he laments.

The plot’s stakes are raised when Vincent decides he’ll kill two birds with one stone: By killing the wealthy landlord, the fee he’ll attain from his estate will help pay off his debt, and the landlord himself will be off his back! Ah, but this landlord is Basil Rathbone—the man who won’t stay “dead!” He’s also the man who won’t let Shakespeare die, as he spends the rest of the film not only spouting olde William’s soliloquies, but brandishing a sword as well! It is just what the doctor ordered, as a film with funny but murderous undertakers would be a horror film and not a comedy if the victims were all serious. Lorre startles Rathbone, who seemingly succumbs on the bed, but Lorre is much more afraid of the sword-wielding fanatic, and falls out the window—landing right on top of Price! As if this visual wasn’t enough of a nod to Laurel & Hardy, Price punctuates the scene with an em¬phatic exclamation: “A ﬁne mess you’ve made of things again!”

The ﬁlm becomes a test of wills, as Price insists on burying Rathbone while Rathbone insists on resurrecting himself over and over again, apparently a recurring condition which Rathbone’s manservant is quick to point out to the ambivalent doctor. Price and Lorre then get to shift gears from Laurel & Hardy to Abbott & Costello, with Lorre in the Costello role and Price assuring him, à la Bud Abbott, that there is nothing to be afraid of. This also effectively changes the tone of the ﬁlm, as what started out as a black comedy becomes pure burlesque. It all leads up to perhaps the longest death scene in movie history, as Rathbone, down for the count, keeps re-emerging to spout one last line of Shakespeare... and then some!

This isn’t the last showdown, as it appears Price kills his wife, and then Lorre. But appearances can be deceiving—they end up more alive than Rathbone on a bad night!

It’s Karloff, however, who gets the last laugh and simultaneously plunges the ﬁlm back into black comedy. All throughout the picture, Vincent has threatened to feed Karloff the vial of poison he keeps in his pocket, calling it his “medicine.” Karloff, seeing Vincent crumpled at the bottom of the stairs, ﬁgures he could use a good drink: “Drunk again, eh? What you need is a dose of your own medicine. You keep it in your waistcoat, don’t you?” Vincent unwittingly gulps down the toxic ﬂuid, as Karloff offers, “...that ought to take care of you nicely!” Several minutes later, Rathbone sneezes—punctuation as afterthought!

“The Comedy of Terrors” is a nice, amusing ﬁnale to the Price/Lorre trilogy. Price and Lorre should be commended for treading on ground where so many geniuses tread before. They prove that they are just as qualiﬁed to play on that ﬁeld. If you reacquaint yourself with their ﬁlms, you may agree—Price and Lorre, though short-lived, were one of the funniest comedy teams of all!

“The Comedy of Terrors” has been released twice on DVD - once in a stand-alone edition and once as part of a double-feature DVD with "The Raven.” Unfortunately, it appears that those DVD's are out of print and only available at expensive prices from collectors. However, you can rent or buy a digital download of the movie from Amazon here:

Best of all, you can watch it for FREE at Hulu by clicking here.

BE SURE TO JOIN US TOMORROW WHEN BORIS COMES DOWN WITH A CASE OF BEACH PARTY MADNESS IN “THE GHOST IN THE INVISIBLE BIKINI!”
Posted by Paul Castiglia at 12:00 AM